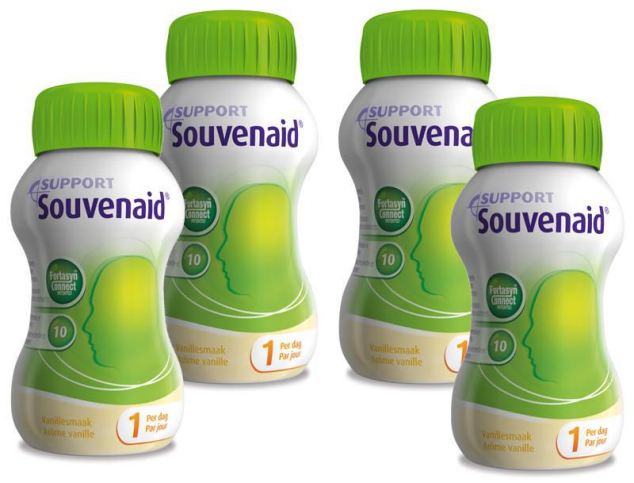 A European wide study on the Alzheimer’s management supplement, Souvenaid, has demonstrated that the nutrient cocktail can help prevent brain shrinkage.

Souvenaid has been on sale in Britain since 2013; however, this is the first time the efficacy of the product has been independently tested. Fortasyn Connect was chosen by a consortium of experts from 19 European institutes due to the results of previous trials as part of a LipiDiDiet project. The recent study was part of the LipiDiDiet project as well, which is intended to explore the therapeutic benefits nutrition can have on cognitive performance and vascular dementia. It was the first study to review the effects Fortasyn Connect had on patients with prodromal AD who were randomized to drink either Souvenaid or an iso-caloric drink once a day.

The clinical trial, which was funded by the European Union and headed by the University of Eastern Finland, found that Souvenaid helped reduce brain shrinkage by 38 percent over two years. In addition, the beverage was shown to improve memory in patients with mild cognitive problems that onset Alzheimer’s disease.

According to Hilkka Soininen, a professor in Neurology who headed the study, “Today’s results are extremely valuable as they bring us closer to understanding the impact of nutritional interventions on Alzheimer’s disease which we are now better at diagnosing but unable to treat due to a lack of approved pharmaceutical options.”

Chock full of vitamins and minerals

Souvenaid is essentially a recipe for vitamins and minerals. The drink contains omega 3 fatty acids, which have been shown to increase brain volume, and is chock full of Vitamins E, B, B13 and C. Other ingredients include uridine, a natural compound found in breast milk, as well as choline, a basic compound found in meats and nuts that aids the transportation of lipids.

We have known for a while that diet can reduce the risk of developing dementia. Indeed, certain nutrients have been found to have a neuroprotective effect on the brain.

However translating this into an effective intervention hasn’t been easy because single nutrients simply aren’t powerful enough to fight a disease like Alzheimer’s alone. Today’s clinical trial results have shown that the key is combining certain nutrients, in order to increase their effect.

Their are approximately 850,000 people with dementia in Britain. That estimate is expected to grow to one million by 2025 and two million by 2050, reports the Telegraph. Unfortunately, there are no effective over-the-counter drugs that can tackle the disease, and treatments for the illness expected to be available for at least five years.

Despite the researchers findings, Alzheimer’s charity groups in Britain are hesitant about the results of the study. Dr. James Pickett, Head of Research at Alzheimer’s society, noted:

“Today’s results show that an over-the-counter nutritional supplement can bring memory improvements for people in the very early stages of the Alzheimer’s disease, providing some relief to one of the most common symptoms.

“However, the study wasn’t considered an overall success as there were no wider improvements in cognition and there was no evidence that the drink can slow the progression of Alzheimer’s disease.

“People worried about their memory should visit their GP for advice. If early Alzheimer’s disease is suspected, this supplement is one option for people to try, along with taking regular exercise, avoiding smoking and eating a healthy, balanced diet to keep their memory sharp.”

“We know that a healthy, balanced diet can be important for reducing the risk of dementia. This nutritional drink aims to supplement a person’s intake of certain nutrients that could help keep connections between nerve cells in the brain healthy, but previous trials of this product in people with Alzheimer’s have had mixed results.

“Today’s announcement is from a trial of Souvenaid in people with very mild memory problems, which are not severe enough to be considered dementia. While the initial results seem to suggest those using the drink may have reduced brain shrinkage, the product didn’t show an overall benefit on memory and thinking, which was the primary goal. These preliminary results are interesting, but we will need to see the full published trial data to gain a better understanding of the potential of this intervention.”

Souvenaid study to continue for another six years

Nevertheless, even critics acknowledged that these early results are positive, and seem to verify the health benefits attributed to the supplement. The study will continue to examine the health effects of Souvenaid for another six years.

“This is exciting because it shows that in the absence of effective drug options, we really have found something that can help slow down some of the most distressing symptoms in prodromal AD; especially in those who started the intervention early,” explained Hartmann. “Indeed those patients who have lost the least cognitive function, have the most to gain.”