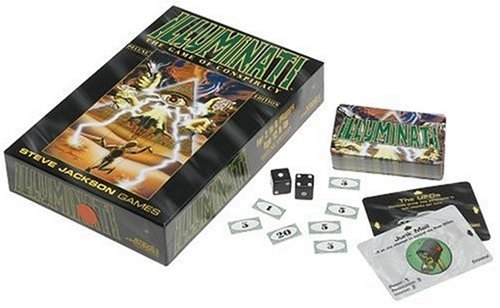 Numerous images sketched onto cards in a 1990s board game appear to have predicted several ominous events before they happened.

Steve Jackson’s Illuminati: The Game of Conspiracy made its way onto the market in 1982 as a role playing game for people twelve and over. Players mask the role of a secret society, and draw cards as they plot to take over the world.

The Illuminati is a name given to many groups, both real and fictitious, which conspiracy theorists believe are attempting to establish a new world order, plucking the strings behind novels, movies, television shows, video games and more.

Some conspiracy theorists believe the game was created by the Illuminati itself, forecasting several catastrophic events the group launched against the world.

The “Terrorist Nuke” card, for example, depicts two towers, one of which is rocked by a large explosion gushing from its center. The picture has the ominous undertones of the 9/11 terrorist attacks. The top of the tower wobbles, suggesting it is teetering on the brink of collapse. 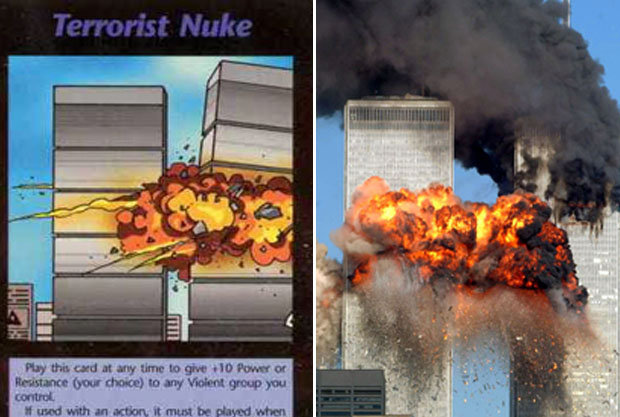 What makes the card particularly unnerving is that it was originally sketched in 1995, six years before the 9/11 terrorist attacks.

The Pentagon was also attacked that day after a commercial plane crashed into its side. Another card, titled “Pentagon,” depicts the U.S. defense HQ engulfed in flames. According to one conspiracy theory, the planes served as a decoy on 9/11. In reality, the twin towers were brought down by nuclear devices that had been planted in advance.

In an article about the card game posted on CuttingEdge, a website which deals with the Biblical prophecy of The New World Order, the author notes:

“The card accurately depicts that the place of impact is some distance from the top of the twin towers.

“The caption at the top properly identifies the perpetrators of the attack as ‘terrorists.’

“The Twin Towers were not destroyed by a terrorist nuclear device, or were they?

“Was a micro-nuclear device used at the base of the Twin Towers?

“That kind of small, but nuclear, explosion would account for the sudden manner the reinforced concrete and steel shell simply crumbled into dust as it fell.”

In regards to the Pentagon card, the author wrote: “When I saw this card, immediately after seeing the Twin Tower picture, my blood froze! Unless one had advanced knowledge of the Illuminati Plan, there is no way on earth that they would have been able to create pictures in 1995 that accurately depict the unfolding events of 9/11.”

Conspiracy theorists also hold that the “Combined Disasters” card foretold the tsunami that sandblasted Japan in 2011. The card depicts the collapse of a clock tower as citizens scurry to escape the chaos behind them. Many believe the clock represents the Wako tower in the Ginza shopping district in Tokyo and predicted the 9.0 magnitude earthquake. 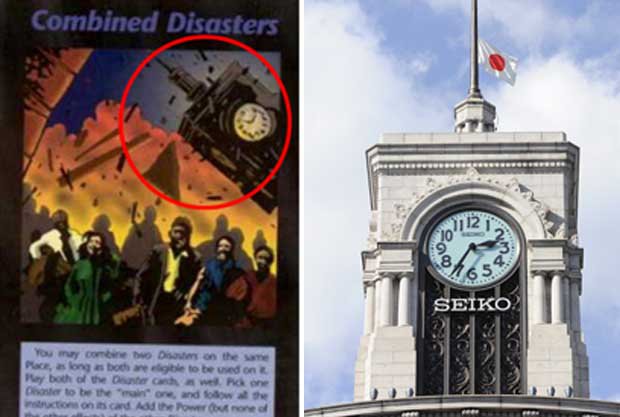 Another noteworthy card is the “Princess Di” card. Sporting a tiara and purple dress, she is surround by a blizzard of paparazzi. The card states Diana is “immune to attacks by your rivals’ Peaceful or Liberal groups…except for the media.” 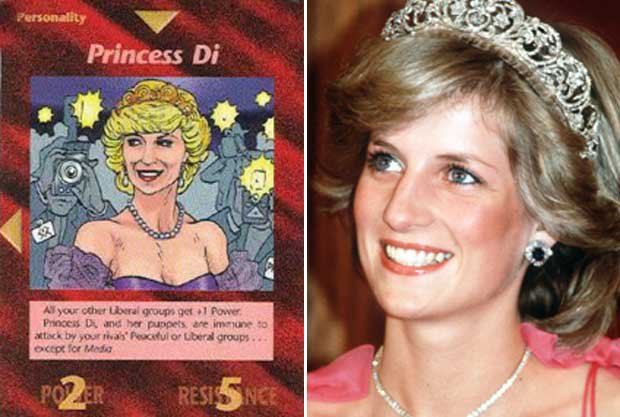 The card doesn’t predict the demise of Diana; however, the fact that Diana died two years later in a high-speed car crash in an attempt to escape the paparazzi, makes the card particularly haunting.

The “World War 3” card takes the prize as the most disturbing cut from the deck. The card gives players the ability to launch a nuclear conflict to bring about the New World Order. The card is mostly engulfed by a mushroom cloud, suggesting the next world war will be a nuclear war. 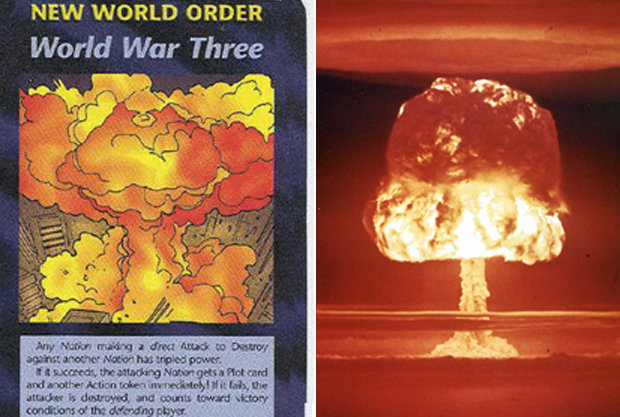 A different card predicts a giant asteroid colliding with Earth, and the last two cards depict the rise of the anti-Christ in wake of the Rapture.

Critics are not impressed by the card images. The Twin Towers, for instance, were subject to a smaller attack in 1993, two years before the 1995 version of the game came out. In addition, many of the events depicted in the cards are generic, and can be interpreted to reflect a wide range of debacles.

Nevertheless, skeptics won’t deter the folks at cutting edge. The author at the website writing about the card game concluded: “If ever you doubted that a global conspiracy could or did exist, you can doubt no longer. This game demonstrates both the existence of the conspiracy and its main details.” 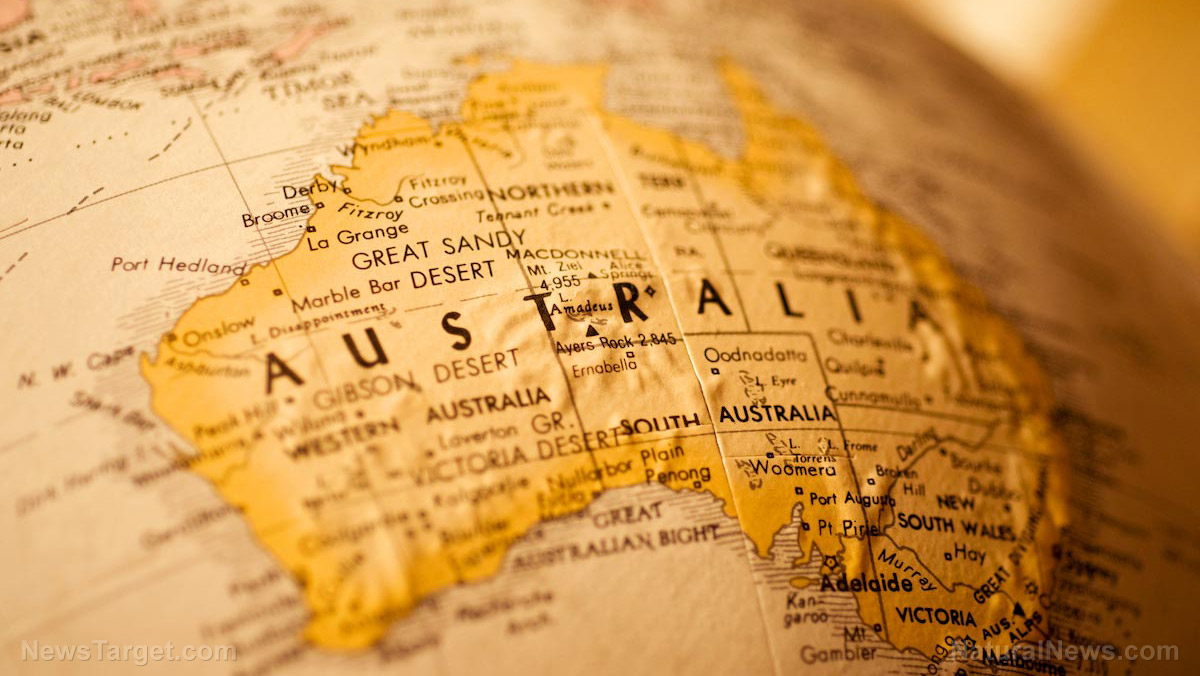 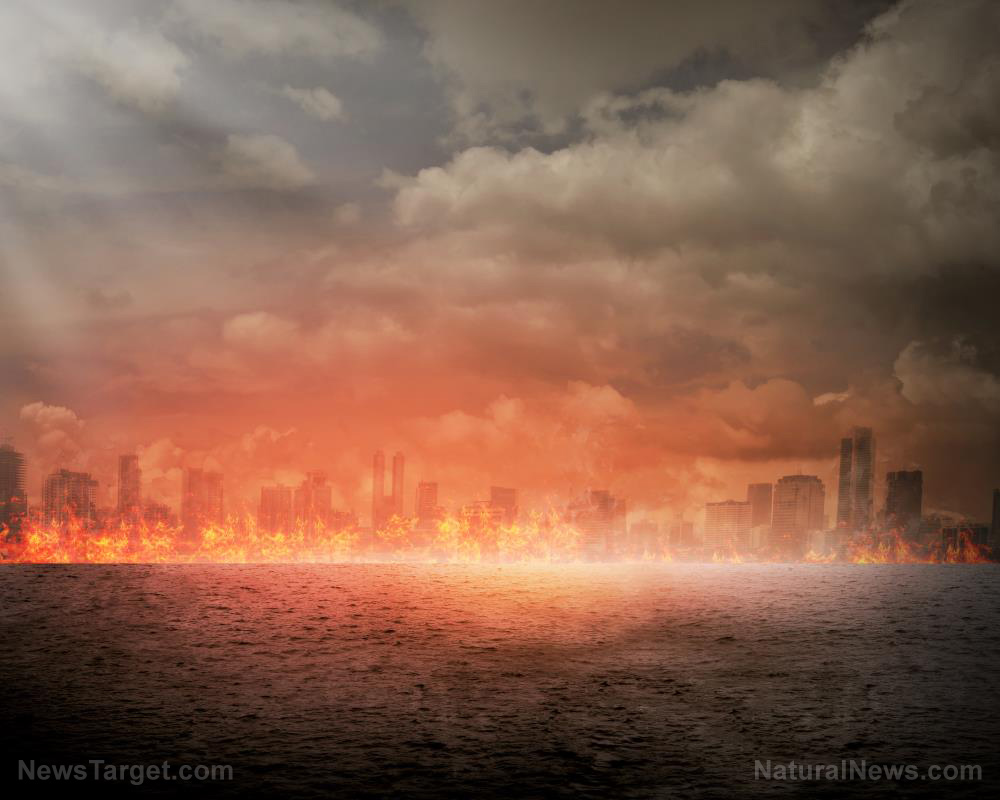 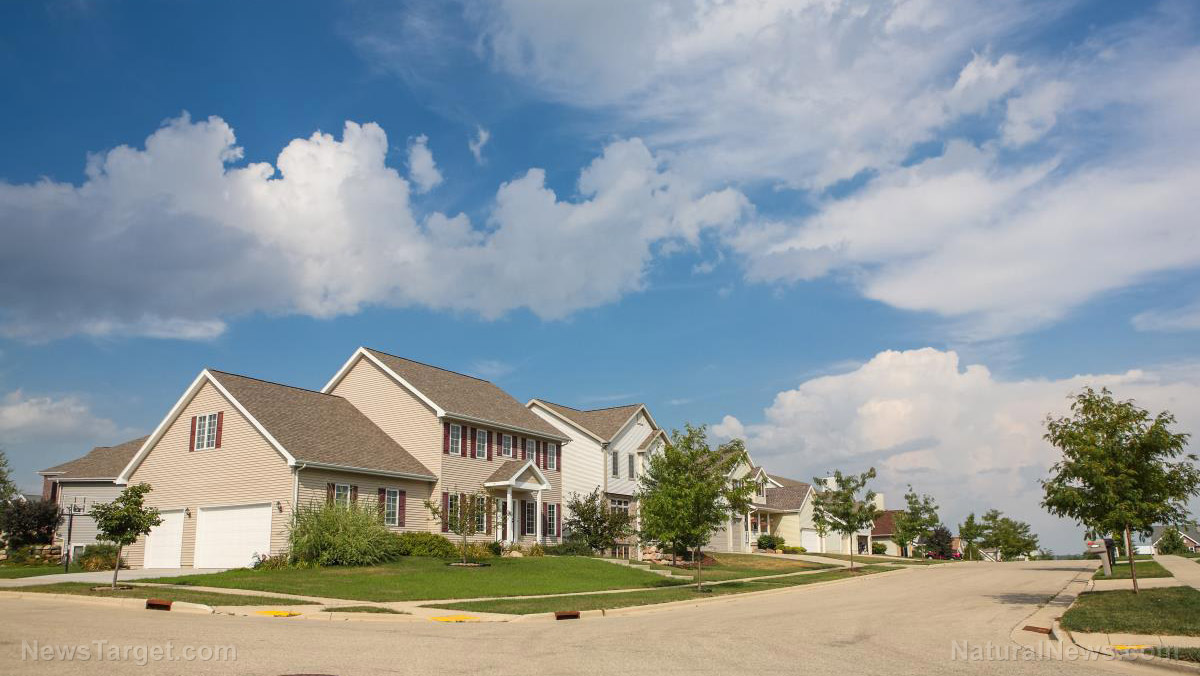