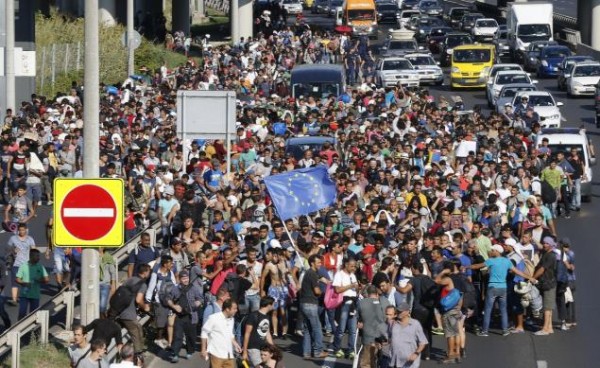 The political divide in Europe is widening over the influx of millions of culturally divergent refugees from the war-torn Middle East, with liberal-minded politicians open to welcoming more while conservative leaders decry them as invaders with opposing morals.

Eastern European leaders and their allies in the media have lashed out at “politically correct” German officials, and in particular German Chancellor Angela Merkel, following a series of sexual assaults committed by mostly Middle Eastern migrants against German women in towns and cities across the country over New Year’s Eve.

Labeling assailants “nothing but hyenas,” followed by a massive “we told you so,” politicians from across Eastern Europe have launched broadsides against Germany’s welcoming attitude and tolerant view overall to the migrant influx, despite rising evidence that there are huge cultural problems beginning to boil over.

As reported by the German daily Spiegel Online, many East European leaders warned Merkel that her actions and those of other politically correct politicians and media risked bringing Europe misery and massive cultural change. Given recent events, they are now feeling vindicated.

The Left-leaning nationalist prime minister of Slovakia, Robert Fico, said during a recent televised debate that the European media generally downplay problems associated with the migrants because they are a “protected species.” Using the Cologne example as justification, Fico has called for an immediate European Union summit to assess and deal with the cultural and security problems that are being created by the ongoing migrant crisis, which includes the formation of so-called “parallel societies.”

He went on to note that his country would not tolerate having its women being insulted in their own streets, but also not in insular Muslim-dominant communities. To their credit Slovakian media backed Fico, slamming the politically correct media in Germany as well as a naïve “subculture of do-gooders.”

Various reports from the BBC and others have shown Germans lining up to welcome mostly Syrian migrants arriving from Hungary and other EU nations, waving banners of “welcome” and handing to migrants bags of food and water. As thanks for that kind of a welcome, scores of migrants have begun suing German authorities for not providing and paying benefits fast enough.

Hungarian Prime Minister Victor Orbán also feels like his criticism has been vindicated. During a recent weekly radio address, he spoke of the crisis in liberalism that has led to the under-reporting by the media of the sex assaults in Cologne and other European cities. He said the Hungarian media was more free to speak than many outlets in the West (which are self-muzzled, essentially) and that he was right to call for immigration moratoria.

But the strongest language was used by Zsolt Bayer, a friend and colleague of Orbán, as well as the co-founder of the Fidesz Party. In writing for the publication Magyar Hirlap, Bayer, a journalist well-known for his hard-right political viewpoint, described the assailants in Cologne as “North African and Arabic animals – nothing but hyenas,” according to Breitbart London. And he said that Merkel is essentially allowing migrants to cannibalize her family and children.

As quoted by Breitbart London another Hungarian media outlet noted: “There are no bastards on this earth more abominable and more destructive than these liberal pigs who are digging Europe’s grave.”

Meanwhile, in Romania, former President Traian Basecu said his nation, like others in Eastern Europe, planned to oppose EU quotas for accepting more refugees. He added that Muslim migrants who believe in and follow Islam, via the Koran, cannot adapt to or ever accept Christian European culture and laws.

The leading Conservative-Liberal Romanian MEP Traian Ungureanu has described Mrs. Merkel and her open-door invitation to Germany as the “disaster of the century”. He also criticised “official censorship” of the events of Cologne he says prevails in Germany, adding:

“Every protest, every hint against gang rape is immediately classified as racism or extremism. It is the duty of public bodies to hide the facts and to deny.”