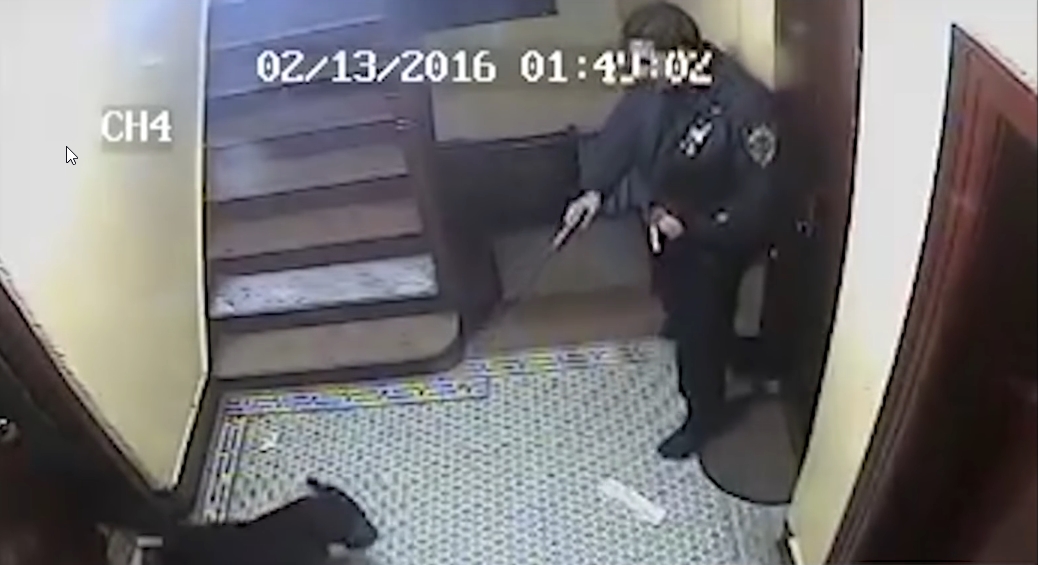 A grieving pet owner said she plans to sue the NYPD after an officer gunned down her friendly dog on February 13.

Yvonne Rosado said her 4-year-old pit bull, Spike, was shot to death by an officer who responded to an unrelated call from a neighbor in her Bronx apartment building.

The neighbor said she was talking to officers when Rosado cracked open her own door to see what was going on. Spike slipped out (as dogs do) to investigate.

“When I realized that it was an officer in front of the door, I said, ‘He’s friendly! He’s friendly!’” Rosado said.

Spike came out with his tail wagging and showed no signs of aggression, she said.

Surveillance video of the confrontation confirms this: it shows Spike sneak through the door with his tail wagging rapidly.

Then the officer backs up, draws his weapon and fires a fatal shot.

I was in shock and I just saw my dog twitching on the floor. Spike came out first, wagging his tail like he always does. As soon as I said, ‘He’s friendly, he’s friendly,’ [the cop] shot my dog.

I’m begging him not to leave me and he’s twitching and his tail’s still wagging. It’s like he’s still trying to hang on. But he just died and I just couldn’t believe it.

Rosado said the officer left the scene without apologizing.

He was just cold and callous. He treated my dog as if he was old furniture being thrown away.

Rosado’s 16-year-old neighbor, Serena Santiago, was standing nearby when the cop opened fire on the dog.

What if he had missed the dog and shot my daughter? She’s traumatized by the whole thing.

Santiago said the cop, who a source identified as Ruben Cuesta, was never at risk.

According to NYPD policy, cops can shoot at animals “only to defend themselves or others from threat of physical injury, or death.” They are only allowed to use their weapons “as a last resort to stop an animal attack,” the New York Daily News reports.

The watchdog site PINAC (Photography is Not a Crime) obtained the full surveillance video of the tragic incident.

It shows a lot more detail than what major news outlets are reporting, and those details are very disturbing.

It shows Rosado comforting Spike, and the cops standing nearby…doing nothing.

After Spike died, Rosado confronted the cops, who then tackled her to the ground in the stairway.

Please understand that it is very violent and graphic. Viewer discretion is advised: