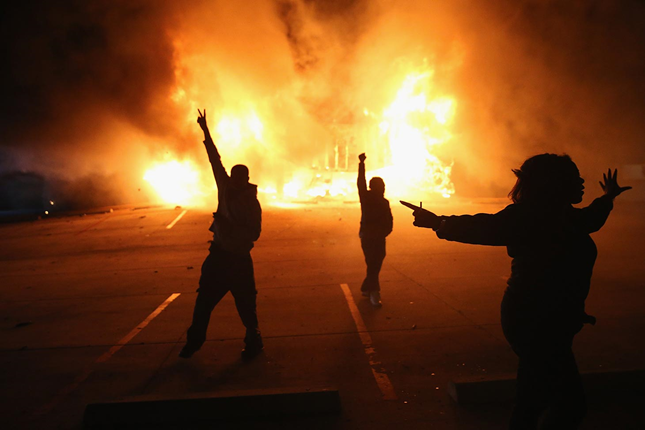 Protests, peaceful protests, have been used successfully in the past in this country to enact change usually change within the government. The United States was essentially formed out of protests and uprisings by the common people that felt, and then realized they were being suppressed. (Story by Amy S., republished from //www.prepperfortress.com.)

In some countries protesters, peaceful or otherwise are summarily shot, and/or beaten, and incarcerated for simply speaking out.

Politicians and governments can be swayed by peaceful protests, but once the protests turn violent the game changes. Whatever policy the peaceful protester were looking to change has been forgotten in many cases.

Once a group is gathered the individual is no longer. Now the group is governed by “mob mentality”. The group will do things as a whole that some individuals would not consider doing on their own.

In most cases it gets out of control quickly, and of course the instigators are pacing back and forth at the fringes whipping the mob up to do bigger and greater things, destructive things in some cases.

It snowballs and then feeds upon itself, because it creates its own energy. Soon others that have no idea, or do not care what the original intent was, are now scattered throughout the groups, and in some cases are only there to create chaos.

What Happens When It Comes To Your Town

First, be prepared to have people, friends and family you thought you knew to change. Their opinion on the matter may differ from yours, and this can create problems in your workplace, within your group of friends and even within your own family.

Something happens, people are outraged, but not everyone finds it outrageous, but people have learned that the squeaky hinge gets the oil (the attention). Groups realize they need a loud voice to be heard and an outrageous act in the name of another outrageous act gets the coverage.

However, there is a tipping point that where if a hinge squeaks too much it gets replaced. It is dealt with, and in the case of protesters getting out of hand, the police and the military step in and then things do get interesting and dangerous for everyone.

Immediately sides are drawn up. Everyone has an opinion and there will be degrees of outrage. Some people are concerned and want answers, but are willing to wait on the system. Others only see red and want revenge, and some just have to show the world how mad they are, they rebel against laws, and against those in charge, and soon they go after those simply trying to make a living in their own city or town. Everyone is a target at some point regardless of your opinion.

It would be difficult to protect yourself from this type of situation. In Baltimore it is alleged the police were told to stand down, let the demonstrator vent. If this is true then the citizens as a whole were put in extreme danger and essentially were on their own. You may very well be put into this type of situation in your town or city.