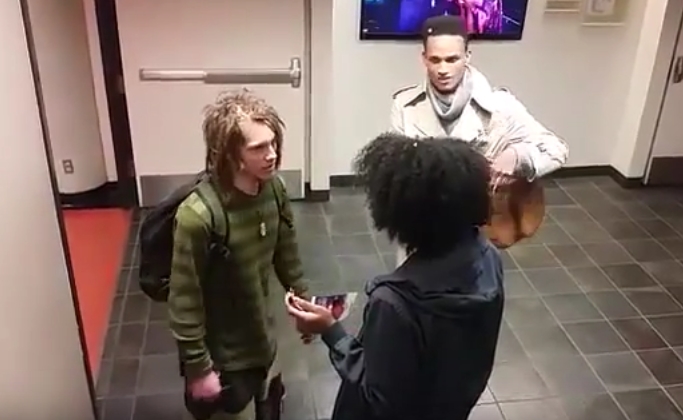 A video allegedly showing a woman at San Francisco State University verbally badgering a student for “cultural appropriation” has gone viral after being posted on YouTube Monday evening.

The woman can be heard telling the student, a white male, he can’t wear dreadlocks because “it’s [her] culture” and threatens to cut them off with scissors. The woman is identified in the YouTube as a “campus employee.”

After the student attempts to extricate himself from the woman’s grasp — “you have no right to tell me what I can wear on my head… stop touching me” — she pulls him back and says, “if you put your hands on me, you’re gonna learn.”

At the end of the video, she asks the cameraman “why are you filming this?” and shoves the lens after he responds, “for everyone’s safety.”

SFSU has responded to the incident in a statement:

We are aware of the video made of an incident which occurred on campus yesterday afternoon. University police were called to the scene of the incident when it occurred. The two individuals involved in the incident are not San Francisco State University employees. Further, no criminal charges have been pressed at this time to the University’s knowledge.

San Francisco State University promotes the rights of the campus community to engage in free speech, but does not condone behavior that impedes the safety or well-being of others. We are taking the matter seriously and will promptly and thoroughly investigate this incident through applicable University channels, including our campus student conduct procedures.