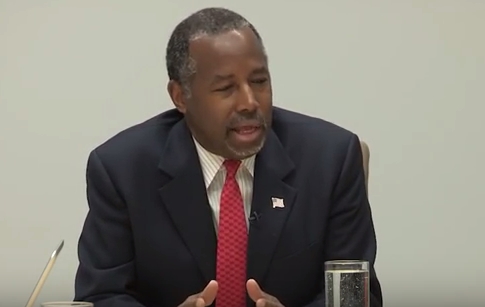 It was meant as a “gotcha” moment, but what happened instead should serve as a huge dose of reality for all the race- and religious-baiters in America who are attempting to shout down dissenters and dissuade them from making factual observations about our life and times.

In recent days Republican presidential contender Dr. Ben Carson was giving a campaign speech during a town hall-style event in Staten Island, New York, when a self-avowed Muslim man stood up and asked him about a previous statement he had made – that someone of the Islamic faith should not be president of the United States.

The questioner identified himself as Hesham El-Meligy, chairman of the Staten Island Libertarian Party; he used his opportunity to challenge Dr. Carson on his statement, The Blaze reported.

Holding a pocket copy of the U.S. Constitution, El-Meligy quoted Article 6, Sect. 3, and stated, “It says, ‘No religious test shall ever be required as a qualification to any office or public trust under the United States.”

How Dr. Carson responded brought the crowd of about 2,000 people to their feet.

“That’s very easy to reconcile actually,” Carson replied. “If you go back to what I said, I said I would not want a Muslim who accepted all the precepts of Islam including Sharia.”

Most probably the leader of the local Libertarian Party chapter was referencing a remark that Dr. Carson made on CNN’s State of the Union program hosted by Jake Tapper.

“You have to reject the tenets of Islam,” Dr. Carson said at the time. “Yes, you have to.”

Sharia is not compatible with the U.S. Constitution

In September, CNN also reported that the pediatric neurosurgeon made similar comments on NBC’s Meet the Press program, when he said, “I would not advocate that we put a Muslim in charge of this nation. I absolutely would not agree with that.”

Pressed further about whether a president’s faith ought to matter to voters, he said:

When he was asked whether he believed that Islam is consistent with the rights and freedoms recognized and protected by the U.S. Constitution, he said, “No, I don’t — I do not.”

A Muslim in Congress, however, is a different matter – maybe.

“Congress is a different story, but it depends on who that Muslim is and what their policies are, just like it depends on what anybody else is,” Dr. Carson said. “If there’s somebody who is of any faith but they say things and their life has been consistent with things that will elevate this nation and make it possible for everybody to succeed and bring peace and harmony, then I’m with them.”

The race and religion baiters took Dr. Carson’s words as a slight towards Muslims, but anyone who is being honest and fair about the matter knows exactly what he is saying and why he is saying it.

There isn’t a Muslim country in existence, today, that both practices Sharia – a legal system that is derived from Islamic law – and extends equal rights and protections to all people, especially women. Being homosexual, under Sharia, brings a death penalty; same for being LBGT, for women seen in public uncovered and without male companionship, and so forth. And this is what Dr. Carson was referring to when he said what he did about Sharia; simply, that it is not compatible with U.S. statutes and constitutional provisions.

He very likely could also have been talking about the major cultural differences of most practitioners of the Islamic faith who are flooding into Europe as migrants; sexual assault and abuse of women, for example, has been rampant and is a growing problem. And much of it believed to be tied to an Egyptian-born practice involving groups of men who attack one or two women at a time.