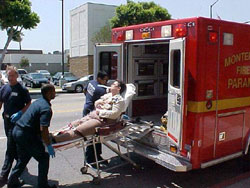 Two Detroit EMTs remain in serious condition after being repeatedly stabbed while trying to help a woman in the 3400 block of Third Street, along Martin Luther King Jr. Boulevard.

Paramedics Alfredo Rojas and Kelly Adams arrived at the scene to treat a woman with an ankle injury, when the man she was with suddenly grew “agitated” at the pair’s assessment of her condition and attacked them.

As the suspect stabbed and slashed Rojas, Adams — a 13-year department veteran — came to her partner’s aid. The suspect then turned his attention to attacking her.

Both Rojas and Adams suffered extensive injuries before making their way to their vehicle. Adams then drove herself and her partner to the Detroit Receiving Hospital, where both received treatment for their wounds.

As the suspect and the injured woman were taken into custody following the assault, Fire Commissioner Eric Jones disclosed plans to meet with Police Chief James Craig to discuss “de-escalation training” and defensive tactic training to prevent another incident like this from happening in the future.