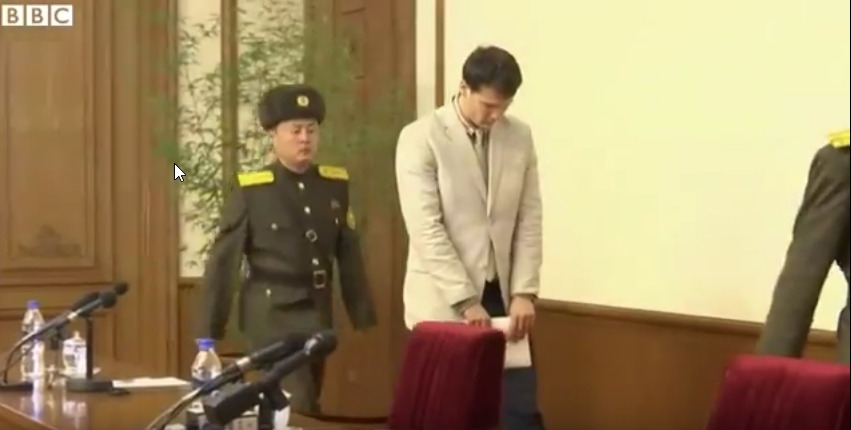 North Korea‘s highest court sentenced an American tourist to 15 years in prison with hard labor on Wednesday for subversion.

He attempted to steal a propaganda banner from a restricted area of his hotel at the request of an acquaintance who wanted to hang it in her church.

Otto Warmbier, a 21-year-old University of Virginia undergraduate student, was convicted and sentenced in a one-hour trial at the North’s Supreme Court. Warmbier, 21, was arrested for trying to steal a propaganda sign from a hotel while visiting North Korea in January He was charged with subversion. No further details were immediately available.

North Korea paraded the student before the media last month in Pyongyang, where he tearfully apologized for attempting to steal the political banner.

He sobbed as he begged for forgiveness for the ‘hostile’ act, claiming the attempted theft, from a staff-only section of the hotel where he had been staying, had been at the behest of a member of a church back home who wanted it as a ‘trophy’.

‘I made the worst mistake of my life,’ the tearful UVA student said at the press conference, which was covered by North Korean and international media, according to CNN.

‘I committed the crime of taking down a political slogan from the staff holding area of the Yanggakdo International Hotel,’ Warmbier said.

‘I apologize to each and every one of the millions of the Korean people and I beg that you see how I was used and manipulated,’ the student’s statement continued.

‘I plead for you to forgive me, not for me, but for my family,’ he added.

According to video seen by CNN, Warmbier bowed his head as he asked for forgiveness.

He said: ‘I never, never should have allowed myself to be lured by the United States administration to commit a crime in this country.

‘I wish that the United States administration never manipulate people like myself in the future to commit crimes against foreign countries.’ The alleged attempted theft occurred on January 1, the day before Warmbier was due to leave the country after a trip organized through the China-based travel agency Young Pioneer Tours (he is pictured today)

‘I entirely beg you, the people and government of [North Korea], for your forgiveness. Please!’

The CIA, an underground organization at the University of Virginia, and a church member in Warmbier’s hometown of Wyoming, Ohio, were all blamed for pressuring the student to commit the crime, CNN reported.

However, the insular East Asian nation, whose official name is the Democratic People’s Republic of Korea, is known for staging propaganda spectacles in opposition to the United States.

He was arrested while visiting the country with Young Pioneer Tours, an agency specializing in travel to North Korea, which is strongly discouraged by the U.S. State Department.

He had been staying at the Yanggakdo International Hotel, which is located on an island in a river that runs through Pyongyang, the capital.

It is common for sections of tourist hotels to be reserved for North Korean staff and off-limits to foreigners.

The alleged attempted theft occurred on January 1, the day before Warmbier was due to leave the country after a trip organized through the China-based travel agency Young Pioneer Tours.

As Warmbier was about to board the plane from Pyongyang, he was detained by North Korean authorities, witnesses said.

An Irish student who was booked on the same flight as Warmbier said the American was accosted by armed officials at the airport and dragged away.

‘When we were leaving one of the other tour group’s [the Young Pioneers] tour leader said ‘We’re missing Otto,” the student, who was only identified as Darragh, told the Independent.

‘[The tour leader] got up and was really frantically running up and down the plane. She ran to the air hostess and was trying to say to the air hostess that “we’re missing Otto.” She then went up to business class and he wasn’t there.’