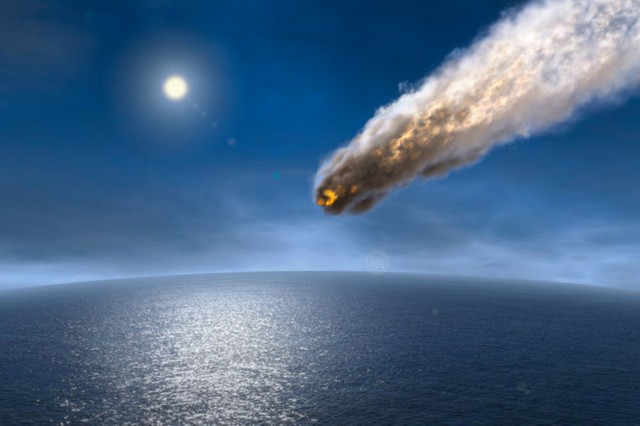 A giant fire ball smashed into the Atlantic earlier this month, which was largely unreported on by the mainstream media. Similar events have gone unnoticed in the past. All this in the round, why are major media outlets ignoring these frightening cosmic occurances?

The incident took place on February 6th when a meteor exploded in the sky approximately 620 miles off the coast of Brazil. The detonation released nearly 13,000 tons of TNT, which is equivalent to the amount of energy compressed into the atomic bomb dropped on Hiroshima.

This is the most violent cosmic occurrence to plague Earth in nearly three years, following a meteor explosion over Chelyabinsk, Russia that injured more than 1,600 people in 2013.

The meteor spanned 18 meters across and penetrated the Earth’s atmosphere at approximately 1,600 mph. A lot of the debris was present in a local lake known as Chebarkul.

“As impacts go, this was pretty small. After all, you didn’t even hear about until weeks after it occurred. Events this size aren’t too big a concern,” noted Phil Plait, a writer for Slate.

The amount of energy released by the meteor would have been a spectacular show to witness in a non-populated area. Unfortunately, the incident went largely unobserved, since it was so far off the coast of Brazil, ESE of Rio de Janeiro.

“Impacts like this happen several times per year on average, with most going unseen,” Plait said.

Larger asteroids are what NASA and the general public should be weary about. The space agency currently monitors around 12,992 near-Earth objects, which have orbits close to Earth’s orbit. Approximately 1,607 of these objects are deemed Potentially Hazardous Asteroids.

Why did the incident go unreported?

According to Paul Chodas, manager of Nasa’s Near-Earth Object office at the Jet Propulsion Laboratory, “There is no existing evidence that an asteroid or any other celestial object is on a trajectory that will impact Earth. In fact, not a single one of the known objects has any credible chance of hitting our planet over the next century.” He forgot to clarify there are no known asteroids on a trajectory course with Earth. Absence of evidence is not evidence of absence.

It would be one thing if the mainstream media failed to take note of the event, since the planet is bombarded by cosmic debris everyday which poses little, if any, danger. Just a few months ago, however, an asteroid nearly collided with Earth, which could have brought about the extinction of humanity.

Commenting on the event, Brian Cox, an English physicist, told the Daily Mail, “We didn’t see it. We saw it on the way out, but if it had just been a bit further over it would have probably wiped us out. These things happen.”

The asteroid, dubbed 2014 EC, passed Earth by 38,300 miles in March, which by astronomical standards, is pretty darn close. To put this into perspective, 38,300 miles is just one-sixth of the distance between the Earth and moon.

In addition, another asteroid, named 2013 TX68, is expected to pass Earth on March 5th at a distance of 9 million miles. There is, however, a chance that the asteroid could come dangerously close to Earth.

“On the day of the flyby, it should brighten dramatically as it moves away from the sun and hopefully one of the large asteroid survey programmes that scan the sky every night will pick it up again,” Patrick Taylor, an asteroid scientist at Arecibo Observatory in Puerto Rico, told sources.

In light of recent events, don’t expect the mainstream press to notify the public of menacing cosmic threats. In the meantime, keep your eyes on the sky.