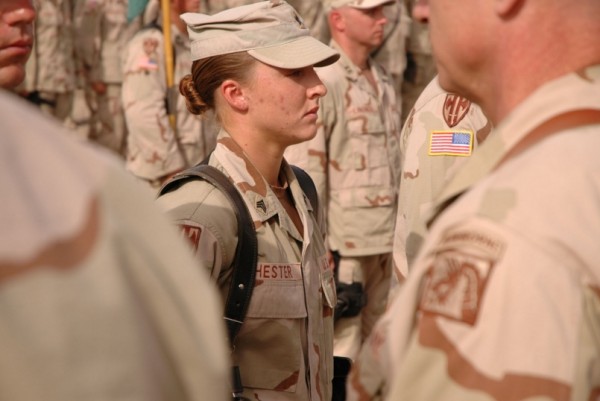 Former Congressman Ron Paul discussed whether granting women the “right” to be included in a potential military draft is really a “right” at all on his Feb. 10 Liberty Report. He and his co-host Daniel McAdams spoke with retired U.S. Air Force Lt. Col. Karen Kwiatkowski, who spent two decades in the military during the 80s and 90s.

Responding to the New York Times’ proclamation that “the next fight for equality is to force women to join men in registering for the draft,” Kwiatkowski expressed that she believes that women are greater contributors to their country when in non-combat roles, such as those involving communication and persuasion, due to their ability to change people’s minds.

In regards to women in combat, Kwiatkowski said you don’t want to deny women all they can be (such as the army slogan goes), but at the same time, it’s important to examine and understand what the military is really doing. She asked what its function is.

By no means is our military a defensive one, said Kwiatkowski. But instead it is an offensive military that routinely engages in combat that is in a tough, physical environment often engulfed in violence, suffering, and trauma. Therefore, women can’t really “defend” the country in the way some are expected to.

Rape in the military

Though Kwiatkowski’s time in the military was positive, she acknowledges that it’s changed a lot since her retirement in 2003, noting what appears to be an increase in rape, both of men and women – a phenomenon Kwiatkowski says runs parallel to America’s prison systems. She’s right.

Just recently we learned that the number of rapes in the military is on the rise, namely “gay rape” or the act of a man being raped by another man, an assault based on power rather than homosexuality. A study by the American Psychological Association found that more than half of sexual assault victims in the military are men.

“Rates of military sexual trauma among men who served in the military may be as much as 15 times higher than has been previously reported, largely because of barriers associated with stigma, beliefs in myths about male rape, and feelings of helplessness,” said the APA.

If men can’t escape this brutal assault, how can women?

Aside from, being a dangerous place physically, Kwiatkowski says the military is nothing but a “vast bureaucracy” and “playground for social policy,” where social experiments are first implemented. There is a lot that women can do outside the military, where they’re free from pentagon bureaucracy, she added.

Kwiatkowski also believes that forcing or allowing women (depending on how you look at it) into a potential military draft is yet another means for the government to exert more control over American citizens. It would allow agencies like the National Security Administration to expand its information databases to include women and their military status, she added.

In the interview with Kwiatkowski, Paul and his co-host McAdams pointed to an article written by Shane Kastler of Target Liberty, who compared the military draft to slavery.

“We have a word in English to describe the act of taking someone against their will and forcing them to work for you. It’s called slavery. One form of this, indeed the most heinous form of this, would be a military draft,” he wrote.

“Because this particular form of slavery involves much more than being forced to pick cotton on a plantation; it involves the high possibility of being blown to smithereens on a battlefield. All while working a profession that you did not choose, fighting a war that you might not agree with, to benefit politicians that you probably don’t even know. “

Kwiatkowski agreed, “Drafting men is evil, but drafting women is evil and insane.”

People have a “misconception about what ‘equal rights’ means,” said Paul. “People cannot all be equal but they should have equal justice,” he added.

In regards to including women in a military draft, Paul said, “You don’t bring about equality by eliminating some liberties of one group so they equal the other group.”