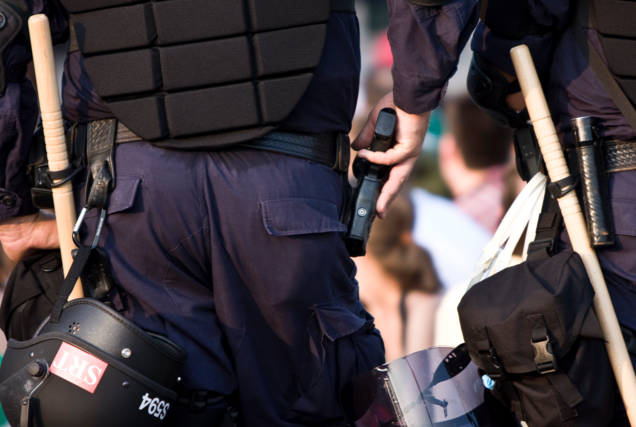 The latest ridiculous arguments to destroy guns comes from Police Chief Ed Holmes, who spoke in favor of HB 2372, which is a bill that relates to the disposition of forfeited firearms in the custody of police.

Holmes, who has served the police department for nearly 22 years and has been the police chief on Mercer Island for nearly a decade, told Washington State representatives, “People look to their law enforcement agencies to keep them safe.”

Stop right there. I’m not looking to law enforcement to keep me safe. I don’t know a lot of people in my area who do. Police officers are not there to keep anyone safe. They are there to follow up once a crime has been committed. It is individuals who are to keep themselves safe. Anybody remember Milwaukee County Sheriff David Clarke’s admonition regarding that? And more and more police chiefs and sheriffs are coming out and saying this.

He then went on to talk about having such a thing on his conscience when he “had the opportunity to destroy it.”

“Governments role should not be in a transaction history of selling guns,” he added.

However, one must ask how is Washington State taking guns away from the “wrong hands” and who determines whether or not someone should have a gun or not? After all, Washington State implemented the liberty violating Initiative 594 back in 2014. The initiative was sponsored by billionaire gun grabbers Michael Bloomberg and Bill Gates, which was nothing more than a universal handgun registration scheme that regulates transfers — not just sales — of all firearms in the Evergreen State. It was such a bad law that one museum removed its World War II exhibit firearms due to the structure of the law and its penalties. However, The Washington Arms Expo openly stated they would not comply with the pretended legislation and its background checks, as citizens pledged themselves to not comply with the “law” in what was called the largest felony civil disobedience rally in history!

So, again, I ask, would these law abiding gun owners be considered the “wrong hands” for guns to be in according to Chief Holmes? Furthermore, if police confiscate guns from criminals, wouldn’t they be performing background checks on those people who purchased those guns that were forfeited? One would think so.

However, this was the very question Representative Jay Rodne asked before responding to Holmes’ comment about government’s role not being a transaction history of selling guns, “You should tell that to the Obama administration.”

His statement drew applause from several in the room.

While Holmes claims that police departments don’t sell the guns, he then turns and claims that they are sold to dealers. Now, in order to do that, those dealers must have a Federal Firearms License in order to sell to someone else. Yes, it’s bureaucracy and yes, I believe it is unconstitutional, but that is how things work.

However, Holmes admits that anyone purchasing the arms from the dealer must go through checks too! However, he claims, “You know, there’s that risk! They were in the wrong hands once, they could certainly be in the wrong hands again, and why are we in the business of being on that transaction history?”

Well, Chief Holmes, there’s a risk you run that someone will steal your gun or one of your officers, should we then follow your logic and destroy them while they are in your possession?

Ronde then hit the nail on the head in exposing the hypocrisy of the background checks system.

“You’re not suggesting that the background checks system is somehow incomplete?” he asked.

“I’m not talking at all about the background system,” Chief Holmes affirmed.

Then what are we talking about? The fact that the police department had a gun they may have confiscated from a violent criminal and then took and sold it to a licensed dealer, who then sold it to a law abiding citizen, who may have it stolen one day by a criminal and use it in a murder? Is that really where this is all going? This, my friends is the lunacy that exists in gun grabbing land. It really is. By the Chief’s own logic, no one should ever sell a gun, including licensed dealers because they may be involved in a transaction history (a lawful one) of a gun that one day may be used in the commission of a crime.