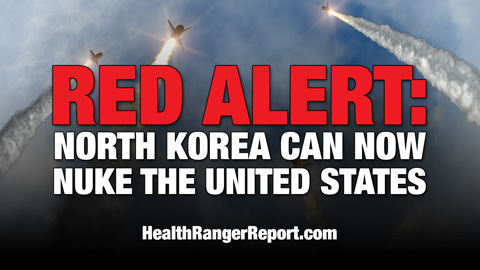 North Korea has now successfully launched a satellite into Earth orbit, demonstrating to the entire world that it has the technology to deliver a nuclear weapon to North America.

Such a weapon could be detonated at high altitude as an EMP weapon, thrusting regions of the USA into the Dark Ages with no power, no computers and no electronics.

Alternatively, the weapon could be used to nuke a city like Seattle, WA. With further enhancements in range, North Korea could strike Chicago or even Washington D.C.

Why is all this such a big deal? Because North Korea is run by a radical totalitarian police state lunatic who has already named cities in the United States that he intends to destroy with nuclear weapons.

Just a few weeks ago, North Korea successfully detonated a hydrogen bomb, proving they now have the technology to mount a thermonuclear warhead on a long range rocket.