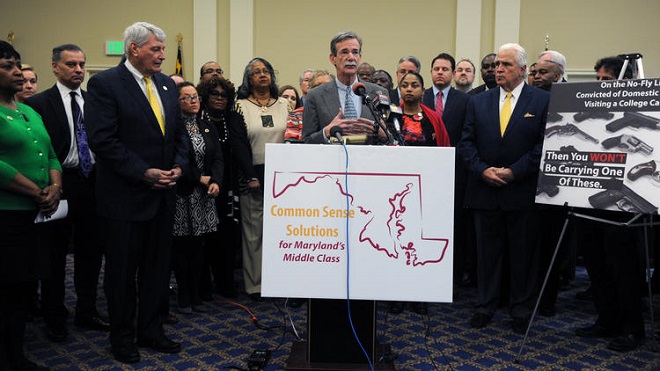 Maryland Democrat Communists are attempting to advance three new gun confiscation measures despite a federal appeals court decision that recently said the state’s 2013 gun control measures known, as the Firearms Safety Act of 2013, were a violation of the Second Amendment.

According to Busch, “We are taking common sense steps to make our communities safer because guns don’t belong on college campuses or in the hands of convicted abusers and suspected terrorists.”

No, you are acting unconstitutionally by infringing on people’s rights without due process of law. This is the same strategy Bush I and Bill Clinton have engaged in (gun free zones on school campuses) and that the Obama administration has recently been pushing via the state-controlled media.

The Senate President added, “We are taking common sense steps to make our communities safer because guns don’t belong on college campuses or in the hands of convicted abusers and suspected terrorists.”

OK, guns don’t belong on college campuses? What about security officers and police Mr. Miller? I’ll bet you think guns belong in their hands on campus. It’s hypocritical to make such a statement. What Miller actually wants is for students to be unable to defend themselves against those who will come on campus with murderous intent, but he wants government to be armed to the teeth.

Additionally, putting in place ex post facto laws to strip people of rights is just as bad, not common sense. It’s almost like playing Double Jeopardy. The person has already been dealt with once, but you want to go back for a second sentencing.

Finally, suspicion of being a terrorist does not make one a terrorist. Infringing on the rights of people out of suspicion is a violation of the Fifth Amendment, just like Barack Hussein Obama Soetoro Sobarkah’s No-Fly No-Buy concept.

Consider some of the people who have ended up on this mysterious terror watch list:

If you recall, back in 2013, when the Firearms Safety Act of 2013, which was just kicked back down to a lower court because it was unconstitutional, one of the Maryland State senators was caught playing chess as he ignored pro-gun testimony. Now, these gun grabbers are acting like the Communists in Connecticut, who can’t stand for people to own high capacity magazines, have semi-automatic rifles and want them all registered or lawful gun owners will be prosecuted.

The good news is that there are vocal patriots in Connecticut. I’m sure there are in Maryland too, but they are going to have to come together and make a stand against the criminals in their government, who are seeking to infringe upon their liberty through legislation that has the color of law, but is anything but lawful.