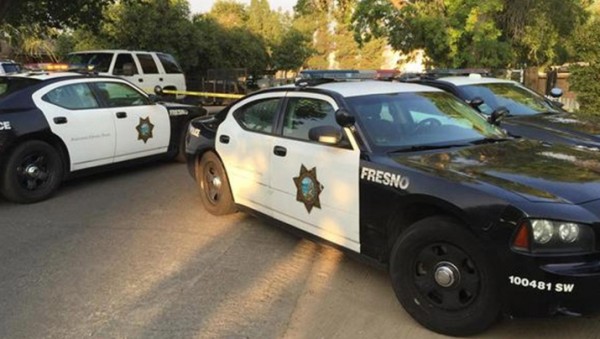 An activist who claimed he was being stalked and harassed by the Fresno Police Department, causing him to fear for his life, was found dead inside his home last month after it was lit on fire and burned to the ground. John Lang, 51, suffered multiple stab wounds to his abdomen and upper back. However, it’s unclear whether he died from his wounds or smoke inhalation, according to Lt. Joe Gomez, a member of the very police department Lang said he feared would kill him.

Firefighters found Lang unconscious and bleeding on his kitchen floor. The crime occurred in broad daylight, yet somehow there appears to be no witnesses. In the days leading up to his death, Lang posted a series of statuses on Facebook claiming the Fresno Police Department was trying to either set him up or kill him.

According to Lang, his trouble with police began in 2009 after he exposed law enforcement’s controversial practice of scanning license plate information from vehicles parked in private retail lots, looking for expired tags and other small infractions.

“Police would then set up a sting where the unsuspecting shopper would be pulled over two or three blocks from where they were shopping so they would have no clue their vehicle was actually scanned in a private parking lot,” said Lang, adding the method was used to “optimize ticket revenue at a very minimal expense.”

Millions of dollars were generated for the city this way, said Lang, who later voiced his frustrations about the practice in the comments section of the Fresno Bee, a move he later realized “was a mistake.”

Though he believed his identity was anonymous on the site’s comment section, Lang accused Fresno Bee Content Producer Jody Murray of “feeding” website log data with identifiable IP address information to Fresno County Sheriff Sergeant Jared McCormick. Police used that information to track down and harass Fresno citizens, posting comments critical of the city and its police department, he alleged.

Lang said police “tailed” him on multiple occasions, they illegally wiretapped his and his family member’s phones, broke into his house and used thermal imaging to detect whether or not he was home, all of which he meticulously documented over the years. Footage of police using thermal imaging to scan his home is available here.

Ten days before Lang was found unconscious in his home, he shared on Facebook an “Open Letter,” which he penned to the FBI and U.S. Department of Justice detailing his harassment by Fresno law enforcement.

“I am fairly certain that Fresno Law Enforcement is trying to set me up on some type a charge related to child pornography,” he wrote on Jan. 17, adding that he felt friends and acquaintances had somehow been turned against him.

Tailing, wiretapping and breaking and entering

Lang accused police of using Stingray tracking devices or “cell site stimulators,” a surveillance tool capable of collecting personal information from a target’s phone, as well as other phones nearby, against anyone they deemed a threat, including activists.

“Fresno Law Enforcement has been harassing and targeting me for over five years. To this day they follow me to work nearly everyday [sic] letting me know of their presence. My situation is the perfect example of the ‘police state’ and ‘big brother’ abusing these various surveillance systems for criminal police purposes,” Lang wrote on Jan 11.

He posted the following on Jan 16:

If I turn up missing or dead tomorrow remember this Van. I think I seen a couple of guys sneak out the side door and…

He also said anyone critical of Fresno Chief of Police Jerry Dyer winds up in legal trouble. Several of Lang’s posts focus on Dyer, who turns out to have been accused of murdering one of his own deputies. Stay tuned for more on that later.

When we reached out to the Fresno Police Department for an update on Lang’s death, they said the investigation is still ongoing but they do not have any suspects, nor are they pursuing any. When asked if they believe Lang’s stab wounds were self-inflicted, Lt. Gomez declined to comment.

They are currently awaiting the release of Lang’s autopsy report. Stay tuned as we continue providing updates on this story, as the details unfold.