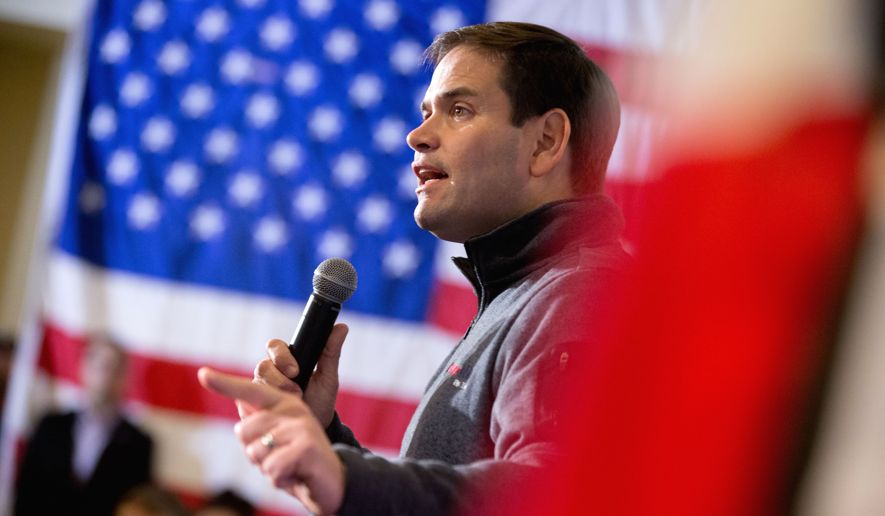 Presidential candidate for the 2016 election, Sen. Marco Rubio (R-FL), is flopping in the polls, likely due to his widely unpopular, anti-American views on immigration, including his support for expanding the H-1B visa program, which provides a loophole for companies to illegally replace American workers with cheap foreign labor.

In 2013, Rubio championed a bill that would increase the number of H-1B visa slots by 45k, in order to “fill jobs Americans can’t do.” That effort failed. However, along with several other politicians, Rubio is now backing the proposed “I-squared” legislation, which would expand the H-1B visa program well beyond the terms of his earlier proposal, allowing companies to hire an unlimited number of foreign workers.

As if stealing American jobs and giving them away to foreigners isn’t bad enough, Rubio has dug himself an even deeper hole after making some highly hypocritical (and again, anti-American) remarks about the National Security Administration and its dragnet surveillance.

Late last month, the Wall Street Journal reported that the NSA was spying on its close allies, including the Israeli government, sweeping up private communications between the Netanyahu administration and U.S. Congress members.

“Obviously people read this report, they have a right to be concerned this morning about it,” Rubio told Fox News on Dec. 30.

“They have a right to be concerned about the fact that while some leaders around the world are no longer being targeted, one of our strongest allies in the Middle East — Israel — is. I actually think it might be worse than what some people might think, but this is an issue that we’ll keep a close eye on, and the role that I have in the intelligence committee.”

Clearly, Rubio’s loyalty is to the Israeli government.

“Rubio’s newfound objection to surveillance appears to be limited to spying on the Israeli government,” The Intercept observed, adding that “the senator has been a long-time defender of the NSA’s mass surveillance.”

Innocent people who dislike being spied on are just paranoid, says Rubio

“There is no evidence that these programs have been systematically abused,” said Rubio last year, insisting that the NSA’s mass data collection on U.S. citizens is “completely mischaracterized.” Rubio told the media that critics of the NSA’s mass spy program were just being paranoid.

“Significant safeguards” are built in, he said. “You can’t just go after someone’s metadata. You have access to it, but you can only truly use it and gain access to a phone bill if they go through a judge.”

But it turns out the Fla. senator was flat out wrong, and was either lying or suffering from memory loss when he issued those comments, because just one year prior, reports surfaced (eventually going viral), exposing a string of NSA employees who used the agency’s sophisticated software to spy on their spouses and ex-lovers, accessing their emails and phone calls.

“In one instance in 2005, a military member of the NSA queried six email addresses of a former American girlfriend – on the first day he obtained access to the data collection system,” Reuters reported at the time.

The same year that NSA employees were caught abusing the spy system, Rubio defended the program, including its surveillance of foreign governments. “[E]verybody spies on everybody, it’s just a fact,” he said.

Why is Rubio protecting the Israeli government?

“One reason Rubio may be carving out a special objection to spying on the Israeli government is that he is competing in the so-called Adelson primary — a contest for the financial backing of the pro-Israel casino magnate who spent $150 million during the 2012 election,” reports The Intercept.

“Already, Rubio has locked in the support of Paul Singer, a billionaire hedge funder who has invested tens of millions of dollars in promoting pro-Israel causes. Singer hosted a fundraising event for Rubio in New York City earlier this month.”