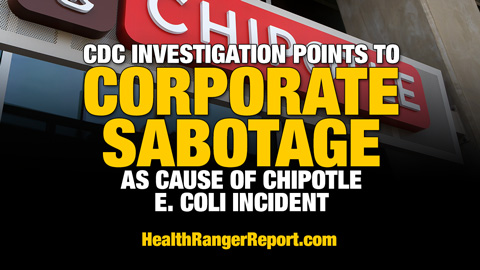 After months of investigation, the CDC has now reached a conclusion that provides yet more support for the likelihood that Chipotle was the victim of corporate sabotage by the biotech industry, which targeted Chipotle because of its non-GMO menu.

On December 23 of last year, I wrote about the likelihood of bioterrorism as the cause of Chipotle’s E. coli problem, pointing out that corporate sabotage was 100% consistent with the actions of the biotech industry and its criminal-minded “mafia” of operatives (see MonsantoMafia.com for a list of all the “mafia” members). That article was predictably downplayed by the mainstream media, whose journalists remain absolutely clueless about the death threats, censorship, defamation and other dirty tactics routinely used by biotech industry shills to silence opposition.

But now the CDC has reached a conclusion in its investigation of Chipotle that further supports my original contention. “The E. coli outbreaks at Chipotle Mexican Grill restaurants in the United States appear to be over, but investigators have been unable to trace the cause of the sickness, federal authorities said on Monday,” reports The New York Times. “[I]nvestigators were unable to specify the food or ingredient responsible for the contamination.”

Read more at //www.NaturalNews.com and //www.GMO.news