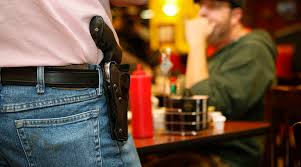 CYPRESS — The brisket at Brooks’ Place arrives with a deep smoky bark that the grill master here lovingly refers to as “black gold.”

The line outside the barbecue joint, little more than a trailer and a few picnic tables parked outside an Ace hardware in this Houston suburb, starts building midmorning. Customers need only bring a solid appetite and a bit of time.

And a gun, if you’re looking for a discount.

Out back, a generator hums rhythmically and post oak logs are piled next to an upright barbecue pit, enveloped in a haze of savory smoke. There are signs banning pets, short shorts and sagging pants, and another with a picture of a handgun. “Firearms welcome,” it reads.

“We felt a need to tell gun owners you don’t need to worry about being judged,” said owner and chef Trent Brooks, sitting near another sign that said, “Thank you for carrying your gun today.”

Brooks is so gun-friendly, he affixed stickers to the walls of the trailer with pictures of targets saying, “Nothing inside worth dying for” and “If you can read this, you’re in range.” He advertises concealed handgun classes on the restaurant’s menu and website, and has offered numerous discounts to gun owners and first responders during his seven years running what Texas Monthly rated among the 50 best barbecue joints worldwide.

After Texas became the nation’s most populous state to permit gun owners to carry handguns openly, or “open carry,” Brooks offered a 25 percent discount to those who took advantage of the law, which took effect with the new year.

Brooks, 45, a sturdy, bearded man who was raised by a father who kept a gun at home for protection, has a concealed handgun license and became a gun rights proponent after two break-ins at his restaurant.

“In Texas, we have a saying: It’s better to have it and not need it than to need it and not have it,” he said as he sat at one of the picnic tables on a weekday morning, wearing a Dallas Cowboys hat (he’s a big fan) and red chef’s smock.

Brooks supported the new open carry law for practical reasons: He said it protects gun owners from being charged with a crime for accidentally exposing their guns.

He rejects concerns that, as an African-American man, openly carrying a firearm might put him at risk, especially with police.

“I’ve stood up here hand in hand with police,” he said.

Although he doesn’t plan to carry a gun every day, Brooks said he wanted the flexibility.

“Before the open carry law took effect, if the wind blew and your gun was exposed and someone saw it, you get accused of a crime,” he explained. “Now, if I go into Lowe’s and I reach up to a shelf and my shirt comes up, I’m not charged with a crime.”

Not everyone sees it quite that plainly. Soon after Brooks offered the open carry discount, his wife noticed a threat posted on their Facebook page.

“I’ll shoot up the place on Saturday” (New Year’s Day), one person wrote. “Let’s see how your gun toting patrons will stop me.”

Brooks had received his share of Internet criticism, including some posts by people who vowed never to dine at his trailer because of his stance, but this was his first threat. Determined to stay open, he contacted the sheriff’s office and hired two off-duty constables to stand guard.

When the day came, no attacker materialized. Instead, Brooks fed 300 people, including about 200 gun owners carrying openly on their hips.

“We had people walk up here just to shake my hand and say thank you for standing up for our rights,” Brooks said as he prepared to serve lunch, including ribs, deer sausage, brisket, smoky barbecue-infused baked beans, cranberry almond coleslaw, and bacon, onion and garlic potatoes.

Jake West, 38, of Cypress, a pipe maker, arrived with his wife and ordered generous plates of brisket and deer sausage.

“I came because it’s pro gun. You know you’re going to be protected,” West said, noting that lists posted online show which businesses do and don’t allow open carry.

“I don’t like to give my business to ones that won’t let me have them. I see the signs, I just go the other way,” West said.

Nearby sat Branden Eagle, 28, a Realtor, weekly customer and gun owner who opposes open carry. What he’s not opposed to are Brooks’ ribs.

“I don’t think we should be living like the Wild West,” Eagle said. “I think a law enforcement officer should be the only one with access to open carry. On the first day, I saw people trying to show off with .45s on their hip.”

But at another table, oil field worker and gun owner Vincent Facundo, 32, of Houston said he supported open carry precisely because that’s how things were done in the frontier days.

“It takes us back to the Wild West. If you go into a business and try to rob them and there’s three guys with guns, you’ll think twice,” he said.

As the lunch hour wore on, dozens of customers slathered heaping plates with jalapeno-infused barbecue sauce and two white-haired women arrived, both wearing handguns on their hips. Most patrons didn’t even turn to look, though one asked to snap a cellphone photo.

“We wanted to show our support” for the restaurant, said Mary Shelton, 67, a retired product manager at nearby Hewlett-Packard. She and her friend had heard about the discount — and the threat — and decided to make their first trip to Brooks’ Place.

“I also appreciate his sign for pants,” she said.