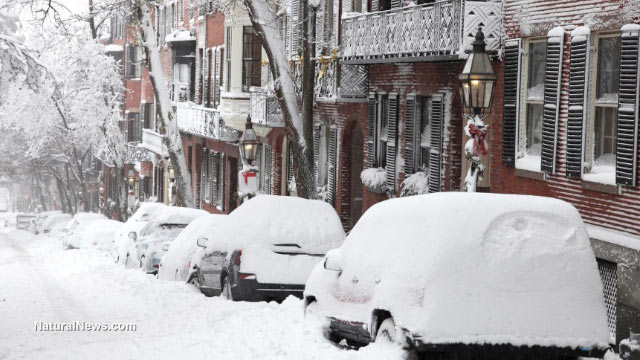 As my wise, old friend Bobby Buffington always says, “There’s a sign from God in every freakin’ thing.”

For former insurance salesman William Koenig, the recent blizzard that swept the northeast is one such sign. Koenig (pronounced KAY-nig) writes a weekly newsletter which “focuses on world news that is biblically relevant and White House news from a Christian perspective.”[1]

As Koenig explains, he is uniquely positioned to detect signs from God, because “My biblical worldview helps address with clarity the unique complexities in Israel, the Middle East, with Russia, China and Europe, and provides an understanding of how events will unfold in the days ahead.”[1]

This blizzard has been given many names. The Washington Post called it Snowzilla. Slate named it David Snowie. The Weather Channel, which names every storm that affects more than 2 million people, named this one Jonas. The reason being that it’s the tenth such storm in the Weather Channel’s fiscal year, and “J” is the tenth letter of the alphabet, and the name beginning with “J” that they happened to choose is Jonas.[2]

In contrast to all the blizzard-namers, the National Weather Service just called it a “major winter storm,” because it gives names only to hurricanes and tropical cyclones. According to meteorologist Paul Kocin, author of the 2-volume book Northeast Snowstorms, this blizzard does not merit a name because it’s “just a very big manifestation of what we see all the time.”[2]

As for William Koenig, he’s going with the Weather Channel’s name, because he says it has biblical significance. “The name Jonas means ‘gift of God,'” he explains. And the gift of God is Israel.[3]
According to Koenig, the blizzard is God’s way of showing disapproval of the Obama administration’s Middle East policy, which evangelicals like himself, see as anti-Israel. However, braindead, retarded morons see it as pro-Israel.[4]

Koenig has written: “When the U.S. or another nation applies pressure on Israel to divide its covenant land, given by God to Abraham and his descendants, there are enormous record-setting storms and/or events that correspond.”

So, what do you think? Was this blizzard a sign from God, or was it just an opportunity to build an igloo in your backyard, and list it for rent on AirBNB, like this particular person did?