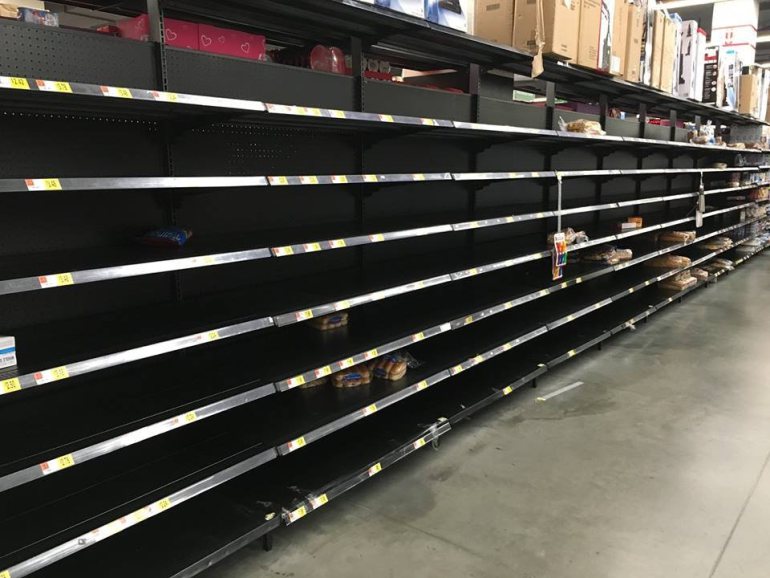 (Bugout.news) If you’ve been paying any attention at all to the weather-related crisis that unfolded late last week in and around the nation’s capital, that should tell you a couple of things: 1) that all of your prepper work and survivalist training has not gone to waste; and 2) in the case of a widespread national emergency, there will be massive upheaval and unrest.

Before the bulk of the predicted 30 inches of “blizzard” snowfall even hit the ground in D.C., hundreds of thousands of residents were already in panic mode. With just 1” of the white stuff, traffic ground to a halt, with drivers sitting on freeways until the wee hours of the morning. Many decided to abandon their vehicles and walk.

In addition, stores shelves at local grocers were stripped barren within hours, leaving many without any stock at all (and with snarled traffic no way to get restocked anytime soon). Is there enough food in all of D.C. to feed all of D.C. and the surrounding region even for a couple of days? We’ll find out, but you get the point we and other prepper sites have been making for years: In an emergency – weather, societal collapse, war – no major U.S. city can feed itself for very long. One person tweeted a picture of empty store shelves, saying, “If you don’t have your food & groceries yet I feel sorry for you.”

As with any emergency, the National Guard has been activated, which, again, was predictable. Not an armed force, mind you, but it is still the military.

All of these things were predictable, and we can only imagine how much deeper the panic will get following the massive snowfall, which is expected to take days to clear.

Now, extrapolate this local emergency to involve hundreds of cities and millions of people: That should give you a good idea of just how things will be in a SHTF scenario.

Right now, the panic has largely been limited to ransacking grocery stores but if the situation were to continue, expect that gas stations and stores like Walgreens and Rite-Aid, as well as Walmart and Target, would follow. Everything would be gone – fuel, first aid supplies, clothing, food, liquor, ammo, camping supplies, you name it – within the first few days. Just look at how quickly food stores around D.C. were emptied; who knows when the roads will be clear enough to restock them?

That said, in a long-term collapse situation, there won’t be any restocking of shelves, as the logistical systems in place during normal times will have collapsed as well. What then?

You’re seeing a small slice of what is in store for the entire country if our “normal” lives are disrupted playing out now along the nation’s East Coast. And just think, this storm was only forecast just a few days before it struck; in a SHTF scenario, we may get no warning whatsoever.

None of this has been lost on Natural News editor Mike Adams, the Health Ranger and founder of Ranger Gear survival equipment. Last week he commented on the DC chaos, observing:

There are some huge lessons in all this; namely that the entire supply of food in America is paper thin and easily wiped out in 24 hours or less…

The second lesson is that you should make sure you’re prepared in advance so that you’re not stuck in the mad rush to acquire supplies when a storm is approaching.

The third lesson here is that you will NOT have advanced warning for many unknowable events (such as an EMP attack), meaning your ability to resupply at that point is zilch. (Hence, supply yourself in advance…)

While it’s unfortunate that some of our fellow citizens are suffering, their plight nevertheless serves as a teachable moment for anyone willing to open their minds to the thought that a little preparedness isn’t “kooky” or “extreme,” but a very wise investment of time and money.

Bugout.news is part of the USA Features Media network of sites. For advertising opportunities, click here.