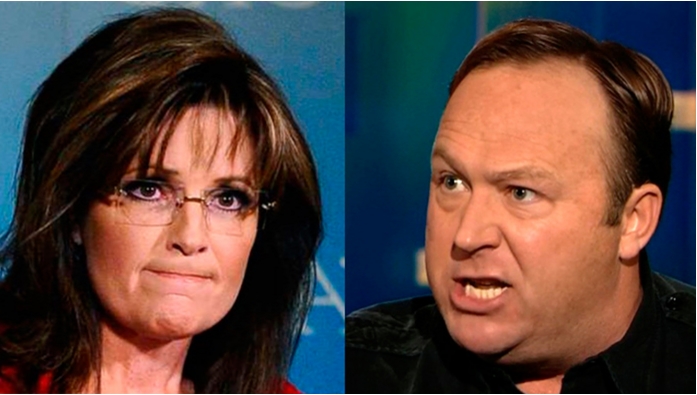 Talk radio show host Alex Jones made quite the spectacle of himself after he was caught flip-flopping on former Alaska Gov. Sarah Palin. Just five years ago, Jones accused Palin of being an operative sent in by the establishment to infiltrate the Tea Party movement. However, 11 months later, Jones reveals confidently that she’s the “real deal.”

Jones’ about-face on Palin quickly surfaced following her recent endorsement of 2016 presidential candidate Donald Trump, whom the talk show host publicly supports. Formerly a self-described independent, Jones has slowly shifted his support to the Republican Party, abandoning many of his Libertarian views.

On Feb. 9, 2010, Jones is heard vehemently telling his audience that “Palin was chosen by Henry Kissinger to be the running mate of John McCain.” Kissinger, according to InfoWars, “routinely facilitated mass murder.”

Five years ago, Jones claimed that Palin was nothing but a “floozy, tart” sent in to distract Republican voters with her irresistible sex appeal,  before criticizing the former governor’s attire and accusing her of wearing “hooker boots” and a “hooker outfit.”

Both Palin and Obama are “puppets,” he added.

Fast forward to last year and Jones is heard describing Palin as being “a lot better than Jeb Bush or Chris Christie.” She’s the “real deal,” he remarks. “She’d make a helluva VP, now that’s a winning ticket right there.”