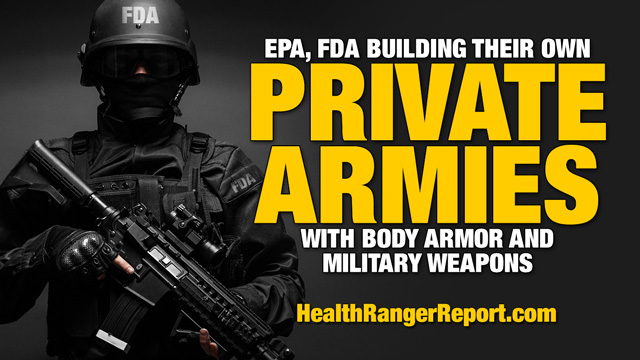 Both the EPA and FDA are arming up with military-style equipment such as body armor, spending tens of millions of dollars on such gear over the last few years.

OpenTheBooks.com has been tracking this government spending on military-style equipment, revealing a frightening pattern of regulatory agencies – which should be pushing paper – now building their own PRIVATE ARMIES to be used as weapons of intimidation and coercion against the People.

The regulatory police state has arrived! When an “environmental” protection agency is building its own private army with military weapons, body armor and assault gear, you know something has gone horribly wrong with the federal government.

Now, farmers can be subjected to military-style EPA raids and intimidation tactics, almost as if the government itself is engaging in state-sponsored terror against American citizens.

As reported by alternative media outlets, the FDA, too, is building its own military-style “government militia” of armed assault teams. Is this part of the FDA’s continued mission to destroy natural products that compete with the profits of Big Pharma?

Make sure to check out HealthRangerReport.com to learn more.