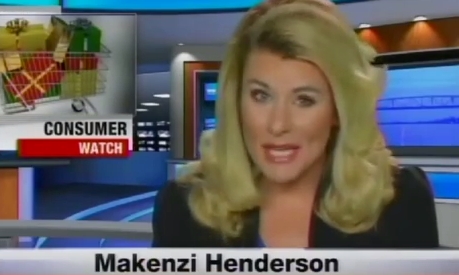 As a comedy bit, popular late-night talk show host Conan O’Brien occasionally shows a compilation of video clips doing local news anchors reading from the same script. The hilarious clip at this link, for example, shows 24 different local news broadcasters all saying the same thing about holiday shopping: “It’s ok, you can admit it. If you’ve bought an item, or two, or ten for yourself.”

It’s not surprising that mainstream news reports the same stories, but how do local station across the country end up telling the news in the exact same words?

Well, the reason is because these news scripts are produced and provided by what’s known in the industry as an “affiliate service.” The affiliate service produces prepackaged video footage and an accompanying script that introduces the footage, which it sells to local stations who subscribe to the service.

It’s related to the use of “video news releases,” which became commonplace of the past two decades, as explained in a classic study of the public relations industry:

“The use of radio and video news releases is a little-known practice which took hold during the 1980s, when PR firms discovered that they could film, edit and produce their own news segments — even entire programs — and that broadcasters would play the segments as ‘news,’ often with no editing…. Video news releases are designed to be indistinguishable from genuine news, and are typically used as ‘story segments’ on TV news shows without any attribution or disclaimer indicating that they are in fact subtle paid advertisements. ‘Most of what you see on TV is, in effect, a canned PR product. Most of what you read in the paper and see on television is not news,’ says a senior vice-president with Gray & Company public relations.”[2]

It’s all economics. Outsourced news saves local stations an estimated 80 percent of the cost of producing a traditional all-local newscast themselves.