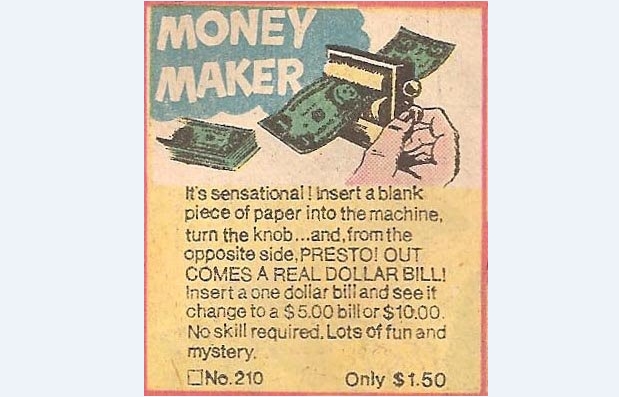 Years ago, there was a product called the Money Maker advertised frequently in comic books. It looked kind of like a machine for rolling joints. The tempting copy said “Sensational! Insert blank piece of paper, turn knob and PRESTO… out comes a real dollar bill. Insert a one-dollar bill and it changes to a $5.00 bill or $10.00. No skill required. Lots of fun and mystery.”

What the advertisement didn’t mention is that you had to load the Money Maker with your own money in the first place! Using the knob, you needed to roll the blank paper (or a bill) into one side, and then your pre-loaded bill simply comes out the other side.

If you think about it, the Federal Reserve is kind of like the Money Maker, in that it creates the illusion of wealth.

Summarizing a common analysis, Mike Adams of NaturalNews.com has explained, “the Federal Reserve is engaged in… counterfeiting trillions of dollars in U.S. bank notes and flooding the U.S. money supply with money created from nothing.”[1]

He continues: “The goal of money creation has always been to loot the economy and transfer wealth from the hands of the workers to the pockets of the rich bankers. For nearly ninety years, this was all done quietly and gradually, but today it’s being done aggressively and right out in the open…[2] The People now own nothing but paper money and ephemeral digital account numbers, all of which could be turned into worthless digits overnight.”[3]

At least with the Money Maker, you get your investment back.

On a related topic, see the review of the new movie The Big Short, on The Health Ranger Report.