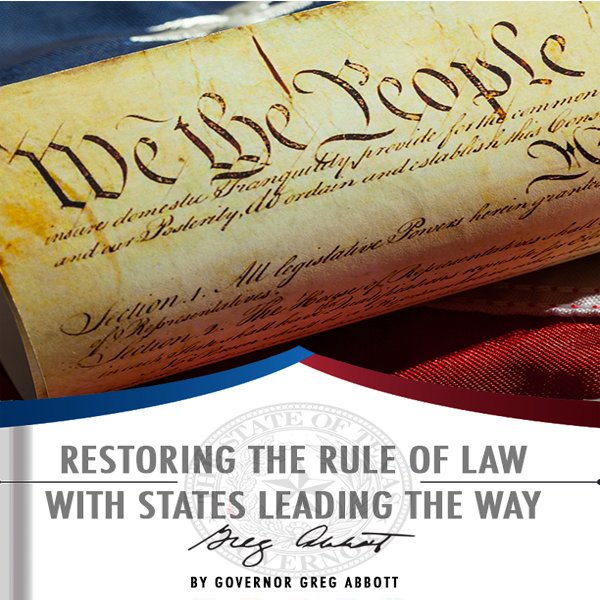 In a bold and overwhelmingly patriotic move, Texas Gov. Greg Abbott is pushing for a convention of U.S. states to pass nine very reasonable Constitutional amendments that would limit federal powers, returning it back to the states.

The proposed changes include prohibiting “Congress from regulating activity that occurs wholly within one State,” which could include matters such as marriage, gun rights, healthcare, marijuana legalization and immigration (particularly for border states).(1)

The proposed amendments also include requiring “Congress to balance its budget,” prevent “administrative agencies” and the “unelected bureaucrats” they employ “from creating federal law” and prohibit those same agencies and their employees from “preempting state law.”

Gov. Abbott is also pushing for amendments that would allow states to override federal law and U.S. Supreme Court decisions if two-thirds of them disagreed, give states the authority to sue the federal government if it oversteps their boundaries and mandate “a seven-justice super-majority vote for U.S. Supreme Court decisions that invalidate a democratically enacted law.”

The following is the full list of Gov. Abbott’s proposed amendments:

I. Prohibit Congress from regulating activity that occurs wholly within one State.

III. Prohibit administrative agencies — and the unelected bureaucrats that staff them — from creating federal law.

IV. Prohibit administrative agencies — and the unelected bureaucrats that staff them — from preempting state law.

V. Allow a two-thirds majority of the States to override a U.S. Supreme Court decision.

VII. Restore the balance of power between the federal and state governments by limiting the former to the powers expressly delegated to it in the Constitution.

VIII. Give state officials the power to sue in federal court when federal officials overstep their bounds.

XI. Allow a two-thirds majority of the States to override federal law or regulation.

Gov. Abbott told media Friday that his intent is to wrestle power from a federal government that’s “run amok,” according to The Dallas Morning News.(2)

“When measured by how far we have strayed from the Constitution we originally agreed to, the government’s flagrant and repeated violations of the rule of law amount to a wholesale abdication of the Constitution’s design,” wrote Gov. Abbott in his 92-page proposal.

“The president took action that threatens Second Amendment rights, even though the entire point of the Bill of Rights was to protect Americans from invasions of their liberties,” he said.

According to The Texas Tribune, a constitutional convention is “an untested route to passing new amendments” and would require the consent of 34 states resulting in a meeting to consider the changes. “Any amendment would require the support of at least 38 states to become law.”(3)

Critics say “the constitutional rules governing a meeting of the states could allow for a ‘runaway convention,’ in which an unlimited number of amendments could be offered.” This could result in “drastic changes to the U.S. Constitution.”

The move could inhibit “anyone to offer up any number of amendments… based on their own ideology and interests, which could ultimately radically change our Constitution,” said Konni Burton, a Republican state senator from Colleyville.

Gov. Abbott dismissed the concerns, reiterating that his proposed policy “leaves it to the states to limit the scope of the convention.

“If we are going to fight for, protect and hand on to the next generation, the freedom that [President] Reagan spoke of … then we have to take the lead to restore the rule of law in America,” Gov. Abbott said in his speech Friday.