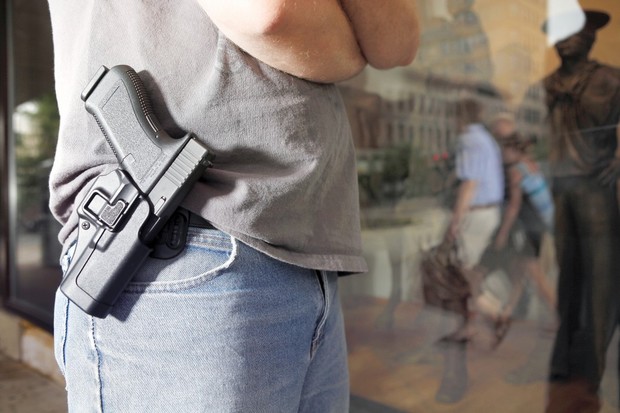 It’s been one week since the new open carry law went into effect in Texas, and, despite some heated discussions and confusion about what the law actually means, daily life in the state appears to be carrying on pretty much as as usual.

The only difference being that licensed gun owners can now openly carry a pistol in public.

Myths and misinformation regarding the open carry(//www.redstate.com) situation in Texas have clouded the debate as the liberal media continue to portray the passage of House Bill 910 as if it represented a return to Wild West rules in a state full of gun-crazed rednecks.

In fact, Texas was one of the few remaining states without some form of open carry law. Texas gun laws were – and still are – stricter than those of many other states.

From The Daily Caller:

“Those not paying attention might assume that open carry is something new, something rare, perhaps reckless at best and dangerous at worst, but that is far from the truth.
Open carry has been around since before the birth of this nation.

“Open carry has been legal in Michigan, my state of residence, ever since it became a state over 175 years ago and as a territory before that. In fact, open carry is currently legal in 44 states, and in 30 states you don’t need a license to openly carry a holstered pistol. Open carry used to be the norm, and one had to be licensed to hide your gun. Over the years various restrictive gun laws have been created state by state, largely in an effort to suppress the ability of minorities and criminals to carry guns.”

The basics of the law

The full text of the new law is a long read, but the basic idea is that Texans who have taken a firearm safety course and who have a LTC (License to Carry) are now permitted to carry a belt- or shoulder-holstered handgun in public. Those who already have valid concealed carry permits are now able to open carry without any new licensing paperwork or fees.

Handguns may not be carried into a business that derives more than 51 percent of its revenue from alcohol. This is an old rule that already applied to concealed carry permit holders.

Despite all the handwringing and propaganda, Texas House Bill 910 is a sensible and essentially unremarkable law that should actually make life safer for those residing in the Lone Star State.

Although some business owners report feeling caught in the middle by having to make a choice regarding open carry in their establishments, others are embracing the new law.

Some, like Trent Brooks, proprietor of Brooks’ Place, a Houston-area BBQ joint, have offered discounts to customers who open carry. On January 1st, the day the law went into effect, Brooks’ Place was knocking 25 percent off the bill for its gun-carrying customers.

That’s a sizable percentage, and I’m sure the extra publicity for supporting the new law and the Second Amendment will earn Brooks’ Place some new patrons.

On the other hand, those who feel uncomfortable eating in a restaurant or shopping in a store where licensed gun owners are free to display their weapons may find other businesses to patronize.

It’s called freedom of choice, and that’s a good thing.