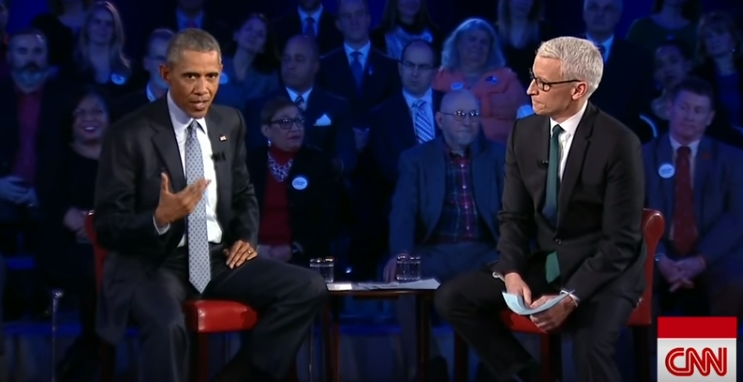 Right on cue, the audience applauded. But what they don’t understand is that it is in fact a conspiracy. However, the general public is too dumb to grasp that concept, primarily because they don’t understand the term “conspiracy” to begin with, since its definition was first misconstrued by the CIA in the 1960s and is used today to discredit truthers.

The true definition of a “conspiracy” is “a secret plan by a group to do something unlawful or harmful,” which is exactly what the federal government plans to do regarding firearms if they’re given the opportunity.

Barrages of well-respected concepts were founded on conspiracy theories, reveals Zero Hedge, including democracy, free market capitalism, Magna Carta, the Constitution and the Declaration of Independence.(2)

However, today, things have changed drastically.

In 1967, the “CIA wrote a dispatch which coined the term ‘conspiracy theories’ … and recommended methods for discrediting such theories. The dispatch was marked ‘psych’ – short for ‘psychological operations’ or disinformation – and ‘CS’ for the CIA’s ‘Clandestine Services’ unit,” Zero Hedge reports.(3)

“The dispatch was produced in responses [sic] to a Freedom of Information Act request by the New York Times in 1976.”

While the actual text is too long to post, Zero Hedge provides a nice, accurate summary of the CIA’s dispatch. It reads as follows:

“In other words, the CIA’s clandestine services unit created the arguments for attacking conspiracy theories as unreliable in the 1960s as part of its psychological warfare operations.

“A common defense to people trying sidetrack [sic] investigations into potential conspiracies is to say that ‘someone would have spilled the beans’ if there were really a conspiracy,” says Zero Hedge. However, as celebrated whistleblower Daniel Ellsberg (known for his controversial release of the Pentagon Papers) explains:

It is a commonplace that “you can’t keep secrets in Washington” or “in a democracy, no matter how sensitive the secret, you’re likely to read it the next day in the New York Times.” These truisms are flatly false. They are in fact cover stories, ways of flattering and misleading journalists and their readers, part of the process of keeping secrets well. Of course eventually many secrets do get out that wouldn’t in a fully totalitarian society.

But the fact is that the overwhelming majority of secrets do not leak to the American public. This is true even when the information withheld is well known to an enemy and when it is clearly essential to the functioning of the congressional war power and to any democratic control of foreign policy. The reality unknown to the public and to most members of Congress and the press is that secrets that would be of the greatest import to many of them can be kept from them reliably for decades by the executive branch, even though they are known to thousands of insiders.