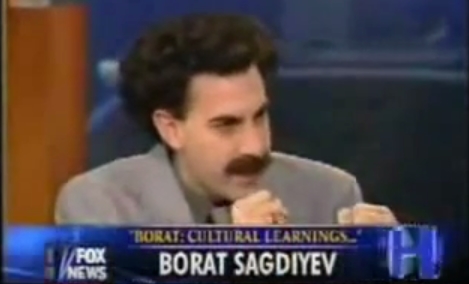 In stark contrast to his ridiculous characters, Cohen and his wife, the lovely actress Isla Fisher, just donated $1 million to Syrian refugees. Syria’s civil war has created four million refugees who have fled to neighboring countries, and over seven million who have been rendered homeless within Syria itself. An estimated 12,000 children have been killed in the conflict.

Half of the donation will go towards education, healthcare, shelter and sanitation for those who are suffering as a result of the ongoing conflict. The other $500,000 will go to vaccinations. According to Save the Children, “500,000 Dollars will be used to fund a programme vaccinating more than 250,000 children against a potential measles outbreak in Northern Syria.”[1]

Justin Forsyth, Save the Children CEO, said: “The Syrian conflict is now approaching its fifth year and children are the first victims. There is no safe place left in Syria, with shelling and violence omnipresent. Food and medicines have become scarce and basic necessities unaffordable. Syria’s health system has collapsed and deadly childhood diseases – like measles – which had previously been all but eradicated have now returned, threatening the lives of hundreds of thousands of children. By allowing us to make their generous donation to Syrian children public, Sacha and Isla are helping highlight the tragedy of the issue today. These are desperate times for Syrian families facing bombs, bullets and torture in Syria. The couple’s donation will save many thousands of lives and protect some of the most vulnerable children.”[1]

Hopefully, that is what actually happens – unlike the 2014 Syrian measles vaccine tragedy that killed dozens of children. As reported in Natural News at the time:

“The horrific incident reportedly took place at a medical center in the Syrian town of Jarjanaz, located in a rebel-held area of the turmoiled country. Dr. Abdullah Ajaj, the man responsible for administering the shots, says the children had all received a second round of the measles shots when their bodies began to swell.”

According to Dr. Ajaj, all of the children exhibited similar symptoms within an hour of the jabs. He also admitted during an interview with the Associated Press that the children all suffered horribly from the vaccines.

“Besides those killed, at least 50 others are reported to have suffered major reactions that have left them in critical condition. The program itself is a product of the Syrian opposition coalition, which is backed by U.S. interests that had planned to inject as many as 1.6 million children throughout the region and in other parts of the world with the tainted vaccines. Speculating as to how the vaccine is harming and killing children, Mohammad Mowas, a Syrian doctor working in Turkey, told reporters that the children’s symptoms suggest cyanide poisoning. As the children turned blue and died, their heart rates gradually slowed down, which he says is consistent with this hypothesis. Others suspect that the vaccine vials, which were shipped in powder form with a diluent, may have become contaminated by a muscle relaxant that was kept in the same refrigerator. World Health Organization (WHO) spokesman Christian Lindmeier told a news briefing in Geneva, Switzerland, that the muscle relaxant, known as atracurium, had gotten switched with the diluent ‘in some cases,’ which may suggest deliberate foul play.”[2]

Vaccination is obviously a contentious issue, and its safety cannot be guaranteed even under the best conditions – let alone amid the chaos of a failed state like Syria.