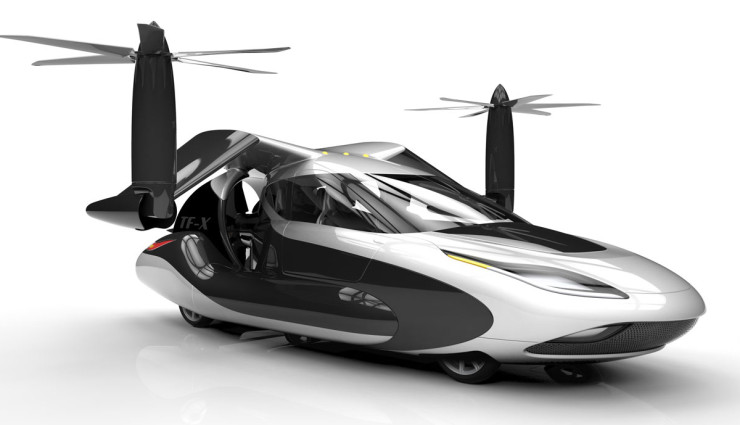 Since vehicles first took the roads by storm, humanity has envisioned a future where cars pave the sky. Unfortunately, flying cars are a reality nowhere to be found except in cartoon programs like The Jetsons. Nevertheless, the dream of flying cars has inched closer to a reality. The Federal Aviation Administration has authorized Terrafugia to operate small Unmanned Aircraft Systems (SUAS) of its TF-X flying car for research and development purposes.

The Italian flying car company unveiled its Transition model in 2012, and is currently developing a more advanced model dubbed the TF-X. It can cruise at speeds clocking in at 200 mph with a 500 mile flight range and requires no airspace to take off or land. The prototype reaches speeds up to 99 mph and altitudes of 396 feet.(1)

First announced in 2013, the TF-X four-passenger hybrid vehicle will be able to recharge its batteries either from its engine or by plugging into an electric car station. It’s small enough to fit inside a garage and can coast along a variety of streets and highways.

“It’s a significant milestone in the development of the program and we’re really excited to be moving forward,” Terrafugia spokesperson Dagny Dukach told R&D Magazine. Dukach claims the FAA-approved model is about two feet long and has a weight restriction of no more than 55 pounds. “We’re hoping to test (the prototype) within the next few months,” he said.(2)

Terrafugia, whose name is derived from the Latin phrase “Escape the Earth,” hopes to see a four-seat, hybrid electric and semi-autonomous flying car under production in twelve years. The price is estimated to be on par with current high-end luxury vehicles. The company has yet to produce a model, but is about to test a one-tenth scale model at the MIT Wright Brothers wind tunnel in the US.(2,3)

“The wind tunnel test model will be used to measure drag, lift and thrust forces while simulating hovering flight, transitioning to forward flight and full forward flight,” states the company.(3)

Of course, Terrafugia’s vision to flood the sky with vehicles is riddled with technical details that have yet to be resolved. Hackers are already capable of breaking into vehicles with nothing but a laptop and cell phone. Planes are too. Imagine how eager terrorists would be to use these vehicles to conduct attacks. Drones have already proven to be a menacing threat to society. Now imagine a terrorist directly behind the wheel of a flying car.

In its actual use, the TF-X will be able to change from a car into a plane. Upon switching to flight mode, the vehicle’s wings will stretch out and two electrical motor pods will be used to levitate the car off the ground. Two helicopter-style propellers will also unfold from the vehicle, producing thrust for airborne travel.

Not the only player in town or the sky

Terrafugia isn’t the only player in town when it comes to flying cars, however. As explained by Douglas Mulhall, journalist and author of the book Our Molecular Future, NASA is currently working on guidance systems for flying cars.(4)

“These will use computerized air corridors much in the same way that some mass-transit vehicles operate without drivers,” notes Mulhall. “In these aerocars, sensors will allow seats to mold precisely to the weight, height, and shape of a passenger, adjusting airbag and other safety systems accordingly.”(4)

“Lubricants may be replaced with nanostructured films so we don’t have to worry about leaks or replacement. Meanwhile, whether your car is being guided along an air corridor or on the ground, new coatings are making the exterior scratch- and weather-resistant, so its new shine will last.”(4)

What makes Terrafugia’s approach to flying cars unique is the fact that the transition model is intended to be more like a plane than a vehicle. Instead of being used as a means to travel the skies, the Transition model has a built-in ground transportation system, which makes it easier for pilots to stop at rural airports.

Watch the flying car in action in the video below.