The Biden regime and fellow Democrats, along with their lamestream media lapdogs, have falsely claimed for months that there was no election theft or vote fraud in the 2020 election, despite massive amounts of evidence proving otherwise.

Now, the regime is working hand-in-hand with China in an attempt to steal as many elections as possible during the November midterms amid reports and polling showing that the Democrat Party should be swept out of power by a massive red wave.

According to an announcement by TikTok, the China-based social media company that was banned by former President Donald Trump and shunned by FCC Commissioner Brendan Carr in June, the social media platform has partnered with the Federal Voting Assistance Program, a U.S. government agency established to assist overseas voters in the upcoming midterm elections.

Specifically, TikTok has established a “Midterms Election Center” which will no doubt give the Chinese access to U.S. election information and electoral systems.

“At TikTok, we take our responsibility to protect the integrity of our platform — particularly around elections — with the utmost seriousness. We’re proud to be a place that brings people together over creative and entertaining content, and we work hard to keep harmful misinformation and other violations of our policies off our platform. As the US midterm elections continue, we’re sharing more on the work we’re doing to protect our community during this time,” wrote Eric Han, head of “US Safety” for the platform. 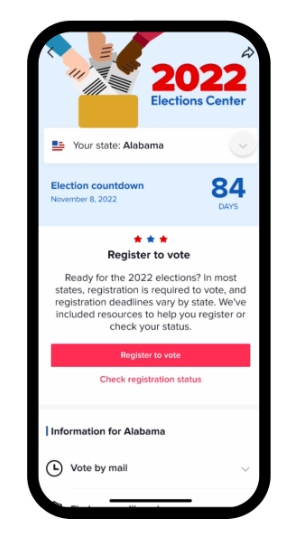 Providing access to authoritative information is an important part of our overall strategy to counter election misinformation. That’s why we’re rolling out an Elections Center to connect people who engage with election content to authoritative information and sources in more than 45 languages, including English and Spanish. For instance, people can learn how and where to vote through information provided by the National Association of Secretaries of State (NASS) and who and what is on their ballot from Ballotpedia.

We’re also collaborating with Center for Democracy in Deaf America to provide information on voting as a deaf person; as an overseas citizen or service member through the Federal Voting Assistance Program; as a student, with help from Campus Vote Project; and as a person with past convictions, with help from Restore Your Vote. As election results are reported, the latest results will be available in our app from the AP.

“We believe the world will be a better place if every citizen has access to accurate, unbiased and non-partisan election information — who is on the ballot and what they stand for — so they can make informed decisions about their vote,” said Leslie Graves, Ballotpedia Founder and CEO.

We are pleased to work with TikTok to help their community not only understand the candidates and their positions but also to empower them to feel confident when they cast their ballot,” Graves added.

It is insane to give China even remote access to any American electoral system, period — but this shows just how unserious the Democratic regime is about ‘Russian election interference’ when Biden’s regime gladly grants China access.

Han attempts to assure us that everything is on the level.

“For any action that requires a user to share information, such as registering to vote, users will be directed away from TikTok onto the website for the state or relevant non-profit in order to carry out that process. TikTok will not have access to any of that off-platform data or activity,” he wrote.

Right — like Chinese hackers don’t have the ability to ‘follow’ users to other websites. But more than that, getting access to voting systems means Beijing’s hackers can change outcomes, and that’s the bigger issue here.

Democrats have completely hijacked our electoral processes so they can perpetually steal power. We cannot survive as a free and democratic country like this.