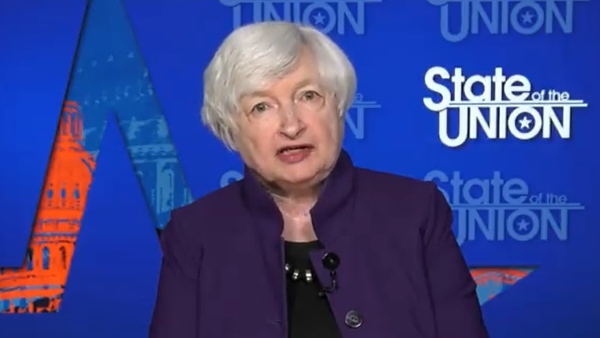 The Biden regime continues to operate on the brink of outright lawlessness, pushing tyrannical measures and becoming more authoritarian by the day.

Specifically, the regime is using international events as a testbed for discovering what it can get away with here at home, as we saw for the past year with the COVID-19 pandemic’s vaccine mandates.

Now, the administration is exploiting the Russia-Ukraine war as a means of further clamping down on political opponents — that would be conservatives who support Donald Trump and MAGA, as well as the news outlets like this one that report on the lies and misdeeds of the current White House and the Democrats who support it.

Case in point: The Biden Treasury Dept. has announced sanctions on “Russian-backed” news outlets for — get this — publishing ‘fake news.’

As reported by Information Liberation:

Yellen provided no evidence or specific examples of any “false information” the various websites allegedly spread to “undermine COVID-19 vaccines” in her press release announcing the sanctions.

The sanctions freeze the websites’ assets and ban Americans from donating to them.

The press release was published online, and also dutifully had a link to Vaccines.gov reminding visitors to get that jab (talk about propaganda).

“On April 15, 2021, OFAC designated Strategic Culture Foundation, InfoRos, NewsFront, and SouthFront for propagating Russian intelligence services-directed content. Since designation, these online media sites have attempted to evade sanctions and continue advancing false narratives against a variety of topics, including the COVID-19 pandemic,” the release states.

“Russia’s disinformation and propaganda machine is a network of official and unofficial communication channels and platforms that Russia uses to create and amplify false narratives,” the release continued. “Russia invests massively in these propaganda outlets to support their disinformation efforts, and it leverages outlets that pose as news sites to spread these false and misleading narratives.”

Then came the dig at Zero Hedge:

These media outlets repeatedly republish content from each other in an attempt to legitimize and popularize the disinformation narratives they propagate. The propaganda they collectively generate then is available to be cited by slightly larger, slightly more credible outlets, which filters their Russian intelligence-directed propaganda to a larger readership. This approach also allows Russia to be opportunistic, such as with COVID-19, where it has used the global pandemic as a hook to push longstanding disinformation and propaganda narratives.

The release then drifts into the realm of the absurd.

“Russia sought to downplay Western concerns about a (then) potential further Russian invasion of Ukraine. Russian intelligence entities target Ukrainian and Russian citizens with disinformation attempting to label Ukraine and Ukrainian government officials as the aggressor in the Russia-Ukraine relationship,” it said.

Well, of course, it makes sense that Russia would attempt to lull the world into a false sense of security prior to launching an invasion. What do the idiots at Treasury think — that Vladimir Putin was going to publish the date and time and places of the invasion?

The point is, if this regime wants to, it will find any excuse to sanction its political opponents in the media by cutting off their ability to earn revenue, which will slowly starve out the only outlets that really report the truth.