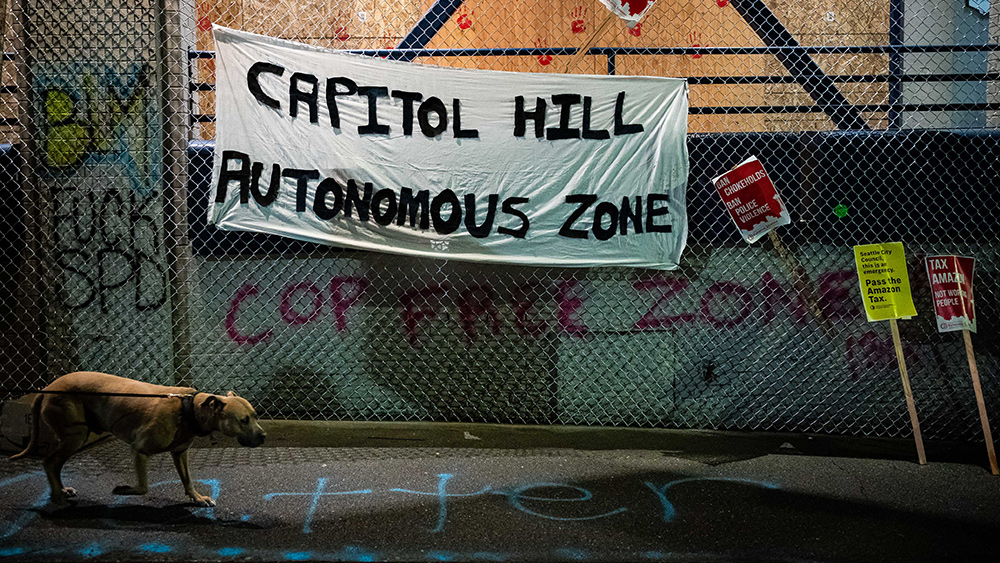 A man who set a Seattle police building on fire that officers had abandoned ahead of occupiers turning the area into an autonomous zone has now been charged in a federal court.

According to police, 35-year-old Isaiah Thomas Willoughby was seen on video at 3:00 a.m. on June 12 emptying a red container full of gasoline onto a pile of debris next to the precinct.

He then left the scene before returning, lighting something, and throwing it on the pile. The criminal complaint filed by the US attorney’s office for the Western District of Washington said that bystanders extinguished the fire; the ongoing occupation in the Capitol Hill organized protest zone meant that firefighters were not able to respond to the scene.

A witness to the incident posted photos of the suspect on Twitter, and Seattle police distributed bulletins to the public with the photos in hopes of getting some leads. An anonymous caller who knew Willoughby informed them that he posted on Facebook that he had burned the precinct before later deleting the post as the media coverage of the incident ramped up.

According to the tipster, the suspect’s yellow hoodie had a unique design on it that was part of a line of clothing represented by Willoughby. A second anonymous caller confirmed that the man in the photos was Willoughby. Police then received a call from the man’s aunt who said, “The person who started the fire is my nephew. Come and get him.”

Willoughby had been living with his aunt and uncle in Tacoma and participating in the protests. When they confronted him about the fire, he admitted to setting it.

He was arrested on July 14 and appeared in court the following day. He is being charged with arson and is facing up to 20 years in prison if he is convicted; arson carries a mandatory minimum sentence of five years.

Willoughby stated that he started the fire because he was mad about the way officers from the precinct treated him in a previous arrest. A search warrant found items of clothing matching those worn by the suspect in the video, and officers were also able to track down his statement about burning down the precinct on a Facebook page linked to him.

Additional charges for other crimes are forthcoming

US attorney Brian Moran said in a statement: “This is the third case we have charged federally for the criminal acts that tainted otherwise peaceful protests. Other crimes remain under investigation and may result in additional federal charges.”

He added: “Those who worked to turn protests into riots will not escape accountability for their criminal conduct.”

Bureau of Alcohol, Tobacco, Firearms, and Explosives Acting Special Agent in charge of the Seattle field division, Mickey French, said: “We support every American’s right to protest, but when someone turns to an act of violence, putting many lives in danger, ATF will work to ensure he or she is held accountable.”

Two other people have been charged with crimes related to the protest in Seattle. Margaret Aislinn Channon was charged with five counts of arson for setting police vehicles on fire on May 30. She used an accelerant lit like a blowtorch to set the fires, putting people nearby at risk. She was identified using tattoos on her arms and hands that were clearly visible in video footage of the incident. Meanwhile, Devinare Antwan Parker was charged with possessing an improvised destructive device for an improvised firearm that he brought to a May 31 protest.