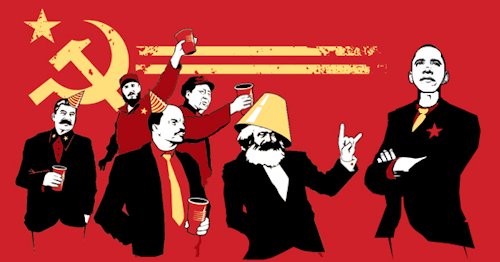 Which has killed more people: disease, famine, nuclear weapons or communism? Here’s a little story. In the mid-1800s, Europe was in upheaval. Violent riots erupted in more than 50 countries. Stores were wiped out by looters. Small businesses ruined. The “protests” had to be “calmed down” with national militia. It got ugly fast. Karl Marx, meanwhile, was busy publishing the very manifesto the Democrats, led by Nazi-sympathizer George Soros, are using today. It was the Communist Manifesto, and it explains in great detail how to take down a capitalistic country and install Communism.

So, what’s the deadliest virus in the world? It’s not coronavirus. It’s not the measles and it’s not the seasonal flu, though the CDC would have us believe otherwise. It’s Communism. For the people, it’s named a happy sounding term, Socialism, but for the record, the middle class is quickly eliminated, and all that remains are filthy rich and broke poor, and the poor are systematically reduced and weakened, until they simply die off young. Period.

Under Socialism and Communism, nobody owns land. Nobody owns their own business. And most importantly, no citizens own any guns. Plus, nobody has the right to criticize the government, or you face jail time or a death sentence for treason. There is no more religion. No such thing. Those times have passed, and those caught praying to God for help get executed in the town square. They are made an example for what happens to the rest who buck the new system. Don’t think so? It happens en-masse in China every day, including today.

And that is Communism, a virus that spreads so fast you don’t even have time to “cover your mouth.” The Democrat Party wants a new Holocaust, and they’re playing straight from the Communist and Nazi playbooks, step by step. Let’s break it down to it’s ABCs.

8 Simple steps for the democrats to install Communism in America

Step I: Create a fake race war that breaks out across America, with some perceived injustice (the old straw man) to “fight” against.

Step III: The State controls your life, your property, your business, and everyone stays on lock down permanently (or long enough to bankrupt all non-corporate businesses).

Step VII: Religious worship is made illegal (so nobody has any hope or ethics/values).

Step VIII: Re-education camps created for all dissenters (propaganda films and real prison if that’s a problem for you).

The plan is to hang rich men for all to see, and that’s what the Mueller investigation of the Russia conspiracy hoax was all about. That’s why the Left is so crazy mad that Trump pardoned Roger Stone. He was meant to be burned at the stake in the name of Communism, and rot in jail ’til he dies of Covid or gets “suicided” and actually hung, just like Jeffrey Epstein.

The Virus of Anarchy that turns into Communist Rule in America

America is already in debt over $20 trillion. Trump has somehow staved off the inevitable complete market crash of the century. Bill Gate’s disease is still spreading in the metropolitan cities of America. Schools are soon to be shut down again, along with any medium-sized or small business. Food shortages are coming again. Long food lines. Forced vaccination. You have no more control over your body or what enters it. Negativity and frustration become contagious, like a virus, and the riots increase in every city, not just the huge ones.

Police will be completed dismissed from their jobs, and all prisoners let out at once. The Democrats want full chaos, and George Soros is funding the Communist playbook with his spare pocket change – hundreds of millions of dollars. Next comes the drones and mass surveillance to make sure all Americans are on house arrest for good.

There was a Holocaust in Russia before Germany, you know. Communism rules in China, where Mao Zedong murdered 65 million people. It’s a very dark world. Voting in America for free “everything” will come at the ultimate price – an evil government that can never again be voted out of office. More lab-made genetically modified viruses, like Covid-19, will purposely be spread to eliminate the immune-compromised masses (about 85 percent of America right now).

Watch this short, informative video about how Communism is the deadliest disease in the world, by far.

Tune your internet dial to FoodSupply.news for updates on how to store quality food for the upcoming apocalypse.