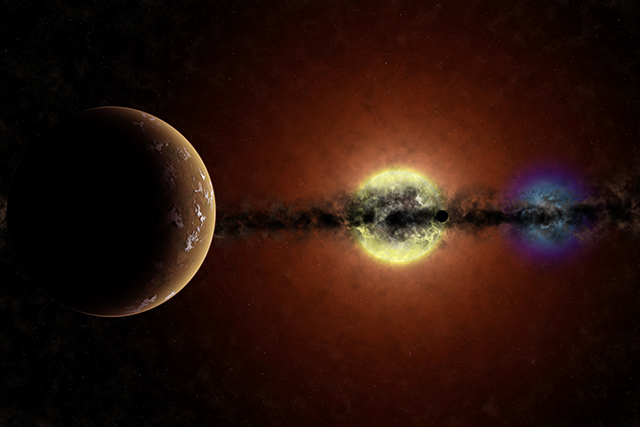 Did you know that there has been an object in the Milky Way 500 light-years away that “blinks” at us daily? Now, astronomers have figured out the reason for this unusual signal.

Called NGTS-7, this celestial object is part of binary system NGTS-7ABM, and appears to most telescopes as a single star. In 2019 however, it piqued the curiosity of researchers at the University of Warwick in England, after they saw it emitting what seemed to look like flares.

Upon closer observation, however, the researchers, led by James A.G. Jackman, found that it wasn’t emitting flares at all — its light just dims briefly every 16.2 hours.

Further intrigued by this discovery, the astronomers further zoomed in, only to find another surprising discovery: there are actually two similarly sized stars in the system, and that only one of them is dimming briefly in that way.

According to the researchers, this phenomenon suggests the presence of an object or body circling on or just above the star’s surface — an object that turned out to be a brown dwarf.

The team detailed their findings in a paper published in the journal of Astrophysics.

“We have reported the discovery of NGTS-7Ab, a high mass transiting brown dwarf orbiting an M-star with an orbital period of 16.2 hours,” the astronomers said.

In their study, the researchers applied a technique similar to the one used to detect exoplanets – by measuring how the light dipped as the brown dwarf passed between its host star and Earth. According to the researchers, this dip represents the signal of a “transit” – a brief, partial eclipse of the star by something too small and dim to see directly, even when using the most powerful of telescopes.

According to the study, the discovery is significant not just because of the very short orbital period of the newly found object, but also because of its relatively high mass: NGTS-7Ab orbits its parent star at a separation of around 0.014 AU, while its mass is assumed to be around 75.5 Jupiter masses. In addition, the radius of this object is estimated at approximately 1.38 Jupiter radii, thus making it one of the most massive objects of this type detected to date.

Moreover, NGTS-7Ab is the shortest-period transiting brown dwarf around a pre-main or main-sequence star so far discovered, and only the fifth brown dwarf transiting an M-star host.

The discovery occurred during the Next-Generation Transit Survey (NGTS), a ground-based robotic search for exoplanets. The brown dwarf nature of the new object was confirmed by follow-up observations. (Related: Life on the Red Planet: Meteorite from Mars shows evidence of “fossilized bacteria”)

According to Hugh Osborn, an astronomer at the Laboratoire d’Astrophysique de Marseille in France, who was not involved in the research, any detection of a brown dwarf is exciting, noting that while the objects themselves are relatively easy to spot given their size, brown dwarfs are actually quite rare.

In an interview with LiveScience, Osborn noted that in comparison to the thousands of exoplanets already discovered by astronomers in the galaxy, only about a thousand brown dwarfs have been found, with fewer than 20 found to transit in front of stars like NGTS-7.

“The fact that we have so few of them … must be because they are extremely rare, and not because we’ve simply missed them,” Osborn said.

Read more about recently discovered stars and planets at Space.news.