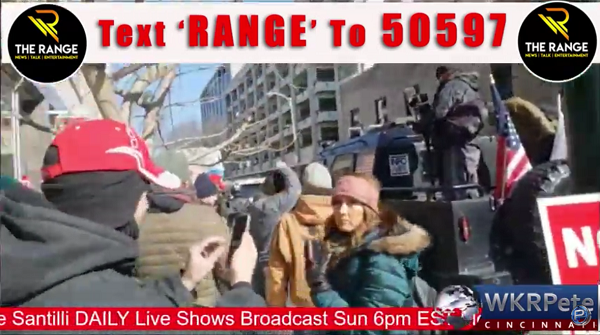 If you ever needed more proof that the Democrat Party was an enemy to the Constitution, using it only when it advances their political agenda, this is it.

Readers are aware that thousands of Americans, most of them Virginians, gathered in the state capital of Richmond on Monday to ‘redress grievances’ with their government of a Democrat-led push for a bevy of new gun control laws.

Most of the people who showed up were armed, because it’s their right — and, as it happens, the state of Virginia ‘approves’ of open-carry of firearms.

So in other words, Virginians were using their First Amendment rights of free speech and freedom of assembly to oppose infringements on their Second Amendment rights. It doesn’t get any more ‘Merican than that, and in fact, the Richmond demonstration — which was peaceful, by the way — was precisely the kind our founders had in mind when they wrote the First and Second amendments.

But leave it to a ranking Democratic Party official to proclaim that Virginians’ inalienable rights to demonstrate and carry guns was actually a criminal act engaged in by desperate, dangerous people.

The Democratic Governors Association’s (DGA) creative director Zainab Javed slandered all 25,000-plus people who attended the Lobby Day rally in defense of their God-given rights to be armed and speak out by referring to them as “terrorists.” (Related: Virginia State Senator warns pro-2A demonstrators being set up for staged terrorism event on Monday, “Lobby Day” in Virginia… “KILL ZONE” trap constructed by Dems.)

“To be clear, this is Terrorism. This isn’t a peaceful protest; they’re amassing this heavily armed for the specific implication that if the Virginia Government doesn’t meet their demands, they will incite violence,” Twitter user @PanasonicDX4500 wrote, and was retweeted by Javed, according to The Gateway Pundit.

No, terrorism is when a Muslim religious fanatic drives a van into a crowd of people in the name of Allah.

Or when a person attacks others simply because their skin is a different color.

Or when a group uses violence to effect political change.

Democrats have an anti-constitutional agenda

This kind of inflammatory language is not only inaccurate, it’s unhelpful. It’s divisive. It’s ludicrous.

But more than anything, it demonstrates the mindset of an American political party that routinely shows its disdain for our founding principles of government.

According to Washington Free Beacon reporter Stephen Gutowski, who spoke to some attendees at Lobby Day, there was no violence at the rally and it was specifically “focused on gun rights” — not ‘racism,’ or ‘bigotry,’ or ‘hate’ unlike most rallies favored and attended by Democrat supporters.

People are begining to clear out as the rally comes to an end. The attendence was massive. There was no violence, disturbance, or really any consternation from what I witnessed. I did not see any racist displays whatsoever. Everyone in attendance was focused on gun rights.

It’s sad that a fellow American would characterize the exercise of two basic constitutional rights in such a way, but we’ve come to expect it from Democrats.

When it’s their voice they want us to hear, the First Amendment is sacred. When it’s a voice they don’t want to hear — like, say, from a conservative on a college campus — they want to revoke the right to free speech by mislabeling it something it isn’t, such as “hate speech.”

Hate speech is still speech, however, and it’s supposed to be protected by the First Amendment, same as most other speech. In fact, you could argue successfully that our founders protected freedom of speech in the Constitution specifically to protect speech that wasn’t universally popular.

The same is true for gun rights. Not everyone, then or now, wants to ‘keep and bear arms.’ But our founders understood the importance of recognizing that right as a means of keeping people safe and free.

Democrats have a political agenda that seeks to undermine and destroy our bedrock founding principles. That’s the only logical explanation for denigrating Americans who are simply living free, as we’re meant to do.

Death of RBG will lead to RADICALIZATION of bloodthirsty Leftists
8:11

RIOTERS to be charged with SEDITION?
11:22

PrepWithMike - Why you need a 3X magnifier with your red dot rifle sight
Featured Videos
5:12

Have dandruff? Try these natural remedies