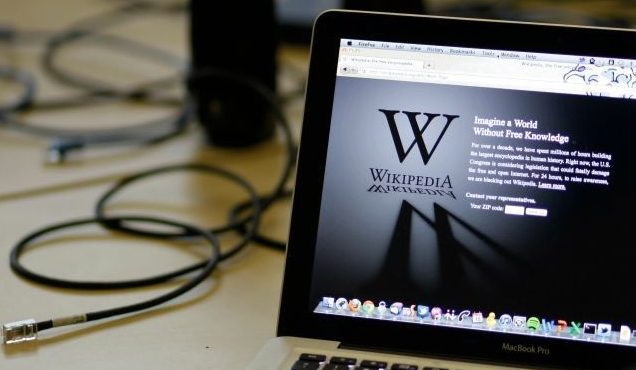 Former Google employees-turned whistleblowers have repeatedly provided evidence and documentation of the tech-and-media giant’s ongoing efforts to shunt and censor information and news reports that are favorable to President Donald Trump and Republicans.

The objective of Google, which is run by Left-wing sycophants and brainwashed Marxists, is to change elections in favor of like-minded Democrats and to throw Republicans out of office. It happened in 2018 according to a noted researcher, and Google is hard at work attempting to sway elections against the GOP and Trump next year.

Wikipedia, which bills itself as the ‘world’s largest online encyclopedia’ is another Left-wing operation and is so tainted with bias against conservatives that most university professors and a growing number of academics refuse to allow their students to cite it as a resource.

According to the garbage mainstream media and Democrats, Trump committed an impeachable offense when he allegedly threatened to withhold military aid from Ukraine during a phone call over the summer unless President Zelensky gave him “dirt” on Joe and Hunter Biden.

But the fact is, according to a transcript of the phone call released by the White House, that’s simply not true: The president made no such threat and asked for no such ‘dirt’ on the Bidens.

And yet, as noted by Doug Lynn at The Burning Platform, platforms like Google, YouTube, and Wikipedia have either censored or hidden exonerating information involving Trump or have lied about the details. (Related: The imminent collapse of Adam Schiff’s “whistleblower” hoax will devastate Dems in 2020 and beyond.)

On September 27, 2019 Fox News host Tucker Carlson discussed Operation Ukraine in a direct way.  But if one searches Google or YouTube, it appears they have scrubbed it from their internet pages.  Here is the episode linked on another site, but if you search “Tucker Carlson tonight 9/27/19” you will see many disconnected clips all shortened to between 1 to 42 seconds…

These platforms are complete disinformation campaigns for the Left

Meanwhile, other Carlson episodes, including his full show on the Democrat-created confirmation circus for Justice Brett Kavanaugh, are easily found on those platforms.

Lynn noted further that it’s been reported that a CIA “whistleblower” who heard about Trump’s phone call with Zelensky via second- and third-hand information, was allowed to file a report with the intelligence community inspector general using that less-than-verified information because the reporting form was recently changed to allow it. Beforehand, whistleblowers were required to have first-hand knowledge of an alleged infraction.

Wikipedia, however, claimed in an entry about the “Trump-Ukraine controversy” that the form was never changed — that it came from “right-wing media and Republican politicians, including Trump himself.”

Since when is it appropriate for a supposedly unbiased “encyclopedia” to use terms like “right-wing?” Or “Left-wing” for that matter? And when the change has been documented (and unchallenged) in established legitimate media, how is it that Wikipedia gets away with making such erroneous claims?

Easy: Such platforms are unchallenged by the bulk of the ‘mainstream’ media, so they get away with making blatantly false statements and deep-sixing exonerating forms of information.

Wikipedia also claimed “there is no evidence” that former Vice President Joe Biden “sought the removal” of a Ukrainian prosecutor who was investigating a gas company, Burisma Holdings, which was, at the time, paying son Hunter $50,000 a month to be a “board member.”

Wikipedia noted “there is no evidence his son was ever under investigation” by the Ukrainian prosecutor. Both are outright falsehoods.

Joe Biden is on video bragging about how he got the prosecutor fired after threatening to withhold $1 billion in financial aid from Ukraine. And One America News reported Oct. 4 that a Ukrainian probe into Hunter Biden has been ongoing even after the prosecutor was fired.

Google and Wikipedia aren’t legitimate sources of news and information. Like the ‘mainstream’ media, they are nothing but propagandists for Marxist Democrats.