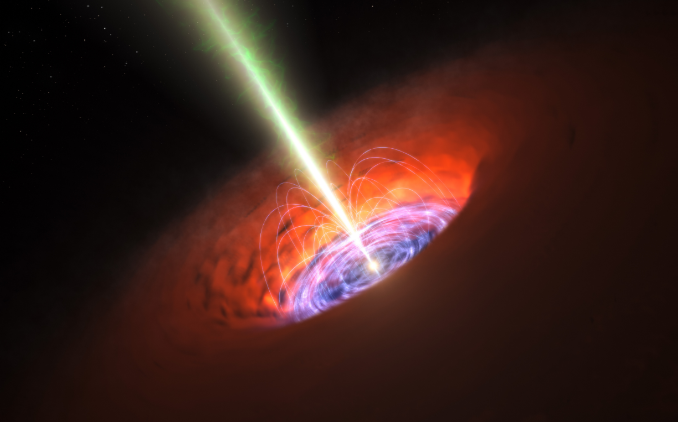 Have you ever imagined what a black hole would look like if it wobbled like a top? Look no further than 8,000 light-years away for such an oddity that also rapidly belches jets of hot plasma while it devours a star.

V404 Cygni caught the eye of researchers not only due to its wobble, but also the way its gravitational field flung plasma clouds away from it at a rapid rate.

Like all black holes, it was invisible to sensors. It revealed its presence through the way it pillaged a nearby star for gas.

Measurements showed that the black hole took just a few hours to complete one rotation. Its rapid spin resembled the wobbling of a spinning top.

Researchers from the International Center for Radio Astronomy Research (ICRAR) reported on the wobbling V404 Cygni. They theorized that the accretion disk formed by the stolen stellar matter became misaligned with the black hole.

The intense radiation forced the disk’s inner area to expand into a doughnut-like shape, leading to its distinct spinning jet appearance. They published this theory in the scientific journal Nature. (Related: Stellar flare on Jupiter-sized star 10 times more explosive than any event on the Sun, reveals expert.)

“This is one of the most extraordinary black hole systems I’ve ever come across,” remarked Curtin University researcher James Miller-Jones, the author of the study. “Like many black holes, it’s feeding on a nearby star, pulling gas away from the star and forming a disk of material that encircles the black hole and spirals towards it under gravity.”

Miller-Jones also noted that the misaligned inner part of the accretion disk fired plasma jets in various directions whenever it changed its bearings.

In 1989, V404 Cygni exploded into the awareness of researchers when it released a tremendous outburst of plasma jets and radiation. Researchers tracked the black hole system to the Cygnus constellation.

About 16 years later, Cygni underwent another period of intense activity. The 2015 event lasted for two weeks.

Intrigued, the ICRAR-affiliated researchers decided to start watching V404 Cygni through the Very Long Baseline Array. However, even the powerful observational abilities of the radio telescope network produced blurry images of the plasma jets.

“These jets were changing so fast that in a four-hour image we just saw a blur,” commented the University of Alberta researcher Alex Tetarenko, the co-author of the study, “It was like trying to take a picture of a waterfall with a one-second shutter speed.”

Eventually, the ICRAR researchers came up with a way to observe V404 Cygni’s activities. They took 103 separate radio images of the black hole and made a movie.

The team hoped that their discovery would tell them more about similar energetic events in the cosmos.

Curtin researcher and study co-author Gemma Anderson said that any black hole would behave like V404 Cygni if it fed on a star at a rapacious rate. When the accretion disk formed by the stellar material failed to keep up with the spin of a black hole, parts of it would shoot out.

The universe hosts many similarly bright and explosive events that may stem from similar misalignments. For example, supermassive black holes are gigantic versions that lurk at the heart of galaxies, including the Milky Way.

Then there are tidal disruption events. When a star comes close to a black hole, it gets torn apart.

Visit Discoveries.news to learn more about the fascinating behavior of black holes and other stellar bodies.