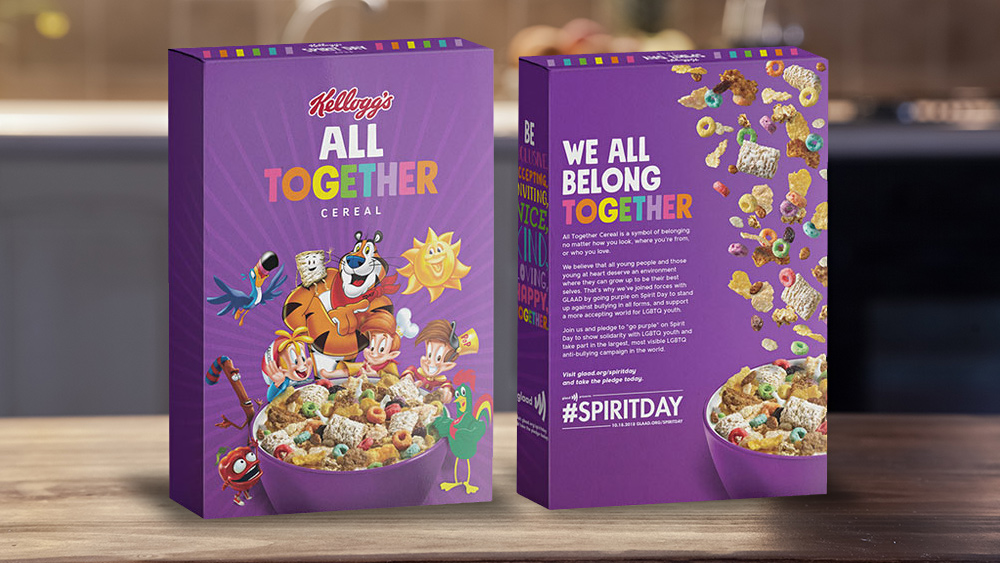 Do you ever wake up in the morning and think to yourself, gee, I wish my breakfast cereal was just a little bit more gay. Well, never fear, Kellogg’s is here with a brand new gay breakfast cereal that the company hopes will encourage more children to “be themselves,” including by getting sex changes to become “transgenders.”

According to reports, the new “All Together Cereal” by Kellogg’s combines Corn Flakes, Froot Loops, Frosted Flakes, Frosted Mini Wheats, Raisin Bran, and Rice Krispies “exclusively together” in a bright purple box with the word “Together” emblazoned on both the front and back in an LGBT rainbow color display.

Timed to coincide with the Gay & Lesbian Alliance Against Defemation’s (GLAAD) recent “Spirit Day” on October 17, the release of All Together Cereal by Kellogg’s is an effort to promote “equality and inclusion in the workplace, marketplace and in the communities where we work and live,” according to Kellogg’s chief diversity officer Priscilla Koranteng.

According to Koranteng, Kellogg’s has also donated $50,000 to GLAAD to continue promoting the LGBT agenda to children, which presumably includes having drag queen perverts read to children at public libraries.

“We all belong together,” Kellogg’s says on its website about its new gay cereal, emphasizing the LGBT theme of coexistence as part of its marketing tactic.

“So for the first time in history, our famous mascots and cereals are offered exclusively together in the same box for All Together Cereal,” the website goes on to explain. “It’s a symbol of acceptance no matter how you look, where you’re from or who you love. We believe that all people deserve an environment where they can be their best selves.”

For more related news about how everything is being politicizing these days, including children’s breakfast cereal, be sure to check out PoliticalCorrectness.news.

Having a gay breakfast experience is expensive, as Kellogg’s All Together Cereal costs $20

Kellogg’s is apparently under the impression that being gay and enjoying breakfast cereal means you also have tons of cash to burn, seeing as how All Together Cereal reportedly costs $19.99 per “special edition” box set.

In other words, in order to fully celebrate your “Pride” before heading off to work, you’ll have to dish out about six times the normal price for the same sugar-laden, GMO (genetically engineered) crap that’s manufactured by Kellogg’s for straight people.

Nothing says “acceptance” and “tolerance” like blowing your entire paycheck on rainbow cereal, after all. And Kellogg’s hopes you’ll do just that in celebration of deranged LGBT cult members who cut their private parts off and take artificial hormones in vain attempts to switch genders.

This mass mental illness, according to Kellogg’s, is something to be celebrated over breakfast with your children – and if you don’t agree, well, then you’re an un-woke bigot.

What were once innocent cartoon characters like Tony the Tiger and Toucan Sam have now been transformed by Kellogg’s into LGBT icons who, for the low, low price of just $20 per box, can sashay across your breakfast table and remind you and your children that gender is a social construct, and that you can still be a “woman” even if you have a penis.

“If there is no push back on things like this and ‘drag queens’ reading perverted stories to children at libraries, within five years people will be labeled as ‘pedophobic’ for defending children from pedophiles,” wrote one Newsbusters commenter. “Why are people not infuriated by this?”

“Why hasn’t the public been infuriated at all the filth of the past 55 years?” another wrote, responding to the first commenter. “The public is worse than stupid.”