TOXINS for VEGANS? KFC, home of monosodium glutamate in fast food, to start serving “Beyond Meat” chicken nuggets that are loaded with even more MSG 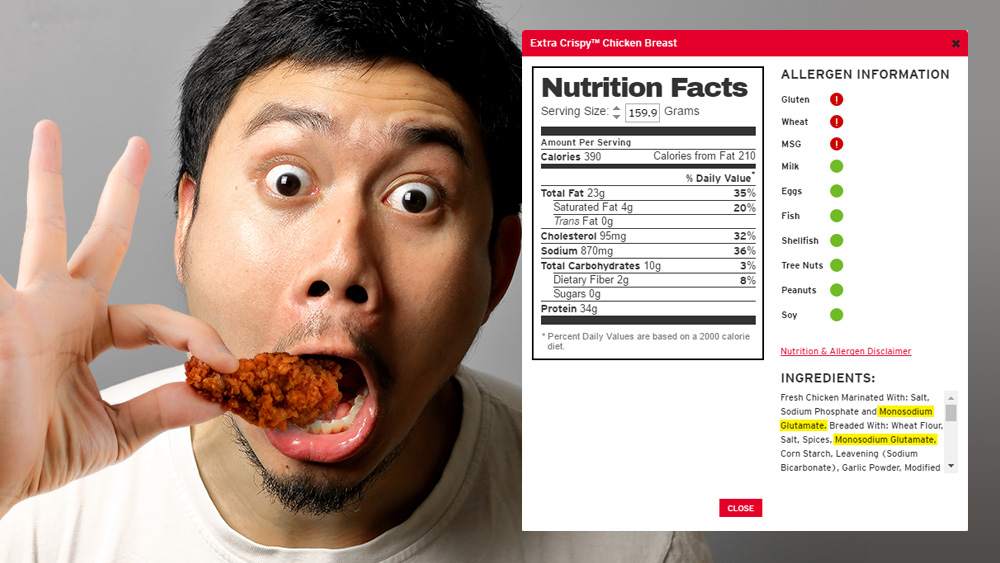 The fast food industry is going buck wild over all of the new “plant-based” meat alternatives that are hitting the market these days, with not just Burger King adopting meatless burger patties but now KFC, which is unveiling meat-free “nuggets” and “wings” at one of its Atlanta locations.

None other than Beyond Meat, whose largest investor is climate lunatic Al Gore, is partnering up with KFC’s Yum! Brands to develop fake “chicken” nuggets and “boneless wing” products that will look, smell, and supposedly taste just like real chicken.

A major competitor of Impossible Foods, Beyond Meat is hoping to dominate the vegan market by catering to not only people who refuse to eat meat, but also “flexitarians” who eat mostly “plant-based” foods with only the occasional helping of meat.

“KFC Beyond Fried Chicken is so delicious, our customers will find it difficult to tell that it’s plant-based,” stated KFC’s chief concept officer for the United States, Kevin Hochman.

Would you like some MSG with your fake meat?

This “plant-based” trend is mostly being driven by the climate change agenda, which claims that the planet is “warming” due to things like cow farts, which could be eliminated if we just murdered all cows and replaced them with genetically-modified (GMO) soybeans.

In the case of Beyond Meat, its primary “plant-based” ingredient is pea protein isolate, a highly refined and heavily processed protein ingredient that’s been linked to liver damage, especially when consumed in very high doses.

Other questionable ingredients in Beyond Meat include expeller-pressed canola oil, another highly processed ingredient that depletes vitamin E from the body and increases the rigidity of cell membranes, potentially leading to degenerative disease.

There’s also “natural flavors,” a common “mystery” ingredient that, in many cases, is actually just monosodium glutamate, or MSG, in disguise.

While Beyond Meat brags that its products don’t contain soy and supposedly are free of GMOs, the fact remains that the ingredients list is quite long. As opposed to real beef, which is just beef, Beyond Meat is a hodgepodge of highly processed proteins, oils, and flavor chemicals that don’t naturally occur in combination with one another.

This doesn’t mean they’re necessarily bad, of course. What it does mean, though, is that the “plant-based” lobby is trying to steer the public away from something that exists naturally, and towards something that doesn’t, claiming that the unnatural thing is somehow more “sustainable” than the natural thing.

“So fried fake chicken and french fries are the healthy alternative to what, exactly?” is how one Breitbart News commenter addressed this point. “That Beyond Whopper nutrition looks horrible.”

“When are vegans going to make meat-based veggies?” joked another.

What the climate lobby is further failing to address with its “plant-based” push is the fact that not all meat is the same. Factory-farmed meat, which is damaging to the environment, is a completely different animal than pasture-raised meat, which is healthy, sustainable, and completely natural.

To learn more about the health benefits of grass-fed meat products versus conventional store-bought meat products, be sure to check out this article by Dr. David Jockers.

You can also learn more about how to grow and raise your own food at home by checking out Homesteading.news.