Cheetah robot walks faster than humans and does 360-degree backflips 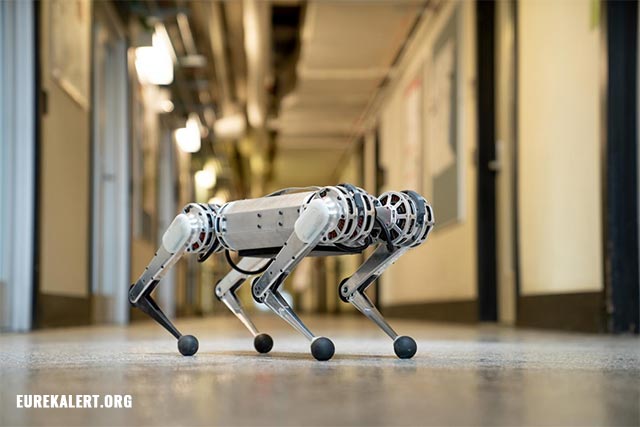 What’s smaller than a dog, can do amazing backflips, and walks faster than you?

The “mini cheetah” – a four-legged powerpack developed by researchers at the Massachusetts Institute of Technology (MIT) – that’s what.

The team unveiled the robotic quadruped at the International Conference on Robotics and Automation in Montreal, where it was showcased together with other animal-like robots like Boston Dynamics’ SpotMini and Unitree Robotics’ Laikago. The former, in particular, is already slated for commercial release, while the latter – an homage to the Russian cosmonaut dog Laika – is already being tested in universities.

It looks like the mini cheetah is late to the game, but the researchers say that it’s designed to be “virtually indestructible.”

When the mini cheetah is kicked to the ground, it can easily recover with nothing more than a quick swing from its elbows. It can even survive a backflip gone wrong and recover with very little damage. In case a limb or a motor does break, the part can easily be swapped with a new one.

“You could put these parts together, almost like Legos,” lead developer Benjamin Katz explained in a statement.

Lighter than a turkey, but it can flip

At first glance, the mini cheetah looks nimble and light on its feet. But the MIT researchers say that it has a wide range of motion that can rival a champion gymnast. It’s able to bend and swing its legs wide, allowing it to walk right-side up or upside down. Much like its namesake, it’s also fast: The mini cheetah’s walking speed is double that of an average person’s. It might not be as fast as the real thing, though: A cheetah from Cincinnati Zoo holds the land speed record, finishing a 100-meter dash in under six seconds.

Aside from being springy, it’s also surprisingly light. The mini cheetah weighs just around 20 pounds, which is lighter than some Thanksgiving turkeys. It’s also the first four-legged robot to do a backflip: Researchers claim that the mini cheetah can perform a 360-degree backflip from a standing position. Here’s a human doing it, for reference:

The MIT team first set out to build a robot that can stretch and twist to display a range of motion similar to yoga while still maintaining balance. The mini cheetah is able to do these things — and other “crazy things” that regular robots can’t do.

“A big part of why we built this robot is that it makes it so easy to experiment…because the robot is super robust and doesn’t break easily, and if it does break, it’s easy and not very expensive to fix,” Katz added.

Smaller and so much better

The mini cheetah is the latest incarnation of MIT’s Cheetah 3, the essentially blind robot that can travel on rough terrain and climb over debris. One thing that the mini cheetah has over its predecessor is mobility: For all its bells and whistles, the Cheetah 3 still weighs 90 pounds and needs to be stabilized. It’s also expensive as each part is custom-designed, and where something as simple as an upgrade could mean “a ton of redesign.”

To avoid this problem with the mini cheetah, the team designed it with modularity in mind. It’s also built using commercially available motors, which makes replacing parts a very easy task.

Each leg has three motors to give it three degrees of freedom and a wide range of motion. Aside from being lightweight, the robot has a high-torque, low inertia design. This allows it to execute flips with high maneuverability and force impact without the risk of breaking limbs or gearboxes. In movement, the mini cheetah can run with its feet touching the ground for only 150 milliseconds at a time, jump in the air with each step, and even run with two feet on the ground at a time.

“Most robots aren’t capable of doing this,” Katz noted.