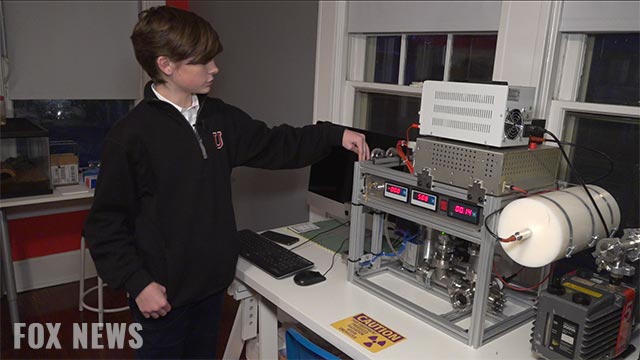 Some teenagers listen to music; some take up a sport that they like; some even spend their time glued to social media and video games – and some, like 14-year-old Jackson Oswalt, build a working nuclear reactor in his family’s spare room.

Jackson, a shy teenager from Memphis, is the youngest person to accomplish this feat — at 12 years old, achieving nuclear fusion just a few hours shy of his 13th birthday. The record was previously held by Taylor Wilson – who, in 2008, built his nuclear fusion reactor in his family’s garage in Reno when he was just 14 years old.

It was also Wilson’s work that inspired Jackson to build one of his own. He thought – as any other 12-year-old would – that he could try to beat this record. He got to work and achieved nuclear fusion, and he hasn’t stopped since.

In a phone interview, he told Motherboard: “Once I saw that he did it, I thought maybe I could give it a shot.”

“It was always in the back of my head that I wanted to be the youngest,” he added.

Reading this story, you might be inclined to think of Jackson as a prodigious student buried in books about nuclear physics. It’s quite the opposite: He hangs out with his friends and plays Fortnite now and again. But Jackson concluded he didn’t want to spend all of his free time playing games, so he began studying nuclear fusion.

Jackson started his research by poring over the internet for nuclear-related things, looking at how other people built their reactors.

“The start of the process was just learning about what other people had done with their fusion reactors,” he told Fox News. “After that, I assembled a list of parts I needed. [I] got those parts off eBay primarily and then often times the parts that I managed to scrounge off of eBay weren’t exactly what I needed. So, I’d have to modify them to be able to do what I needed to do for my project.”

He caught on quickly, and in an old playroom in his parents’ house started working on building his reactor. With the support of his parents, he spent around $10,000 collecting all the parts he needed for his reactor. But putting the parts together and making it work proved challenging. Jackson relied on trial-and-error and consulted an online forum of amateur physicists.

Chris Oswalt, his father, was impressed by his son’s work. But he was also concerned for his safety, given that Jackson was working with 50,000 volts of electricity and radioactive material. His parents enlisted the help of Jackson’s physics teacher and researchers from St. Jude Children’s Hospital to advise him on radiation.

“As a parent, safety was my No. 1 concern,” he added. “Jackson was able to become an expert, but we all learned together.”

Jackson mostly kept working on the reactor, posting updates in an online forum and getting advice and pointers. On January 19, 2018, he was able to combine two deuterium atoms (a stable isotope of hydrogen) in his reactor’s plasma core to create a neutron. After it was slowed down, his device detected nuclear fusion. He posted his results in the forum, where it was verified by Richard Hull – the same person who checked Wilson’s work with nuclear fusion in 2008.

A process that powers the stars

Nuclear fusion is the process by which light atoms are smashed together to produce energy. It’s also the process that allows that sun and other stars to generate light and heat. In a fusion reaction, hydrogen isotopes fuse together to create a helium atom and a fast neutron. For this reaction to happen, hydrogen atoms must first be superheated. This strips the electrons from the atomic nuclei and forms a plasma. High temperatures also allow the nuclei to fuse and form other elements since the repulsive forces that separate positively charged nuclei can be overcome under this condition.

The reaction also creates massive amounts of energy. Scientists are looking for ways to tap into this energy, with the U.S. Department of Energy (DOE) funding 10 university-led research projects to develop methods of making nuclear fusion a practical energy source. In a statement, Paul Dabbar, DOE undersecretary for science, said that the research is geared towards achieving steady-state operation of fusion reactors, which the department considers “an important milestone” in sustainable energy research.  (Related: Cities are exploring nuclear fusion as a potential power source.)

Interested in learning more about nuclear fusion? Physics.news has more.