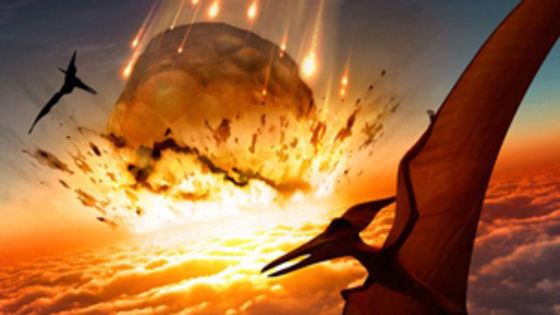 The catastrophic asteroid that penetrated planet Earth approximately 66 million years ago caused intense and widespread volcanic activity. Observing geological evidence, today’s scientists largely agree that these natural and celestial forces are the reason dinosaurs were eliminated from the face of the planet at the end of the Cretaceous period. There is speculation, however, that dinosaur populations were waning before this catastrophic event. Some scientists believe climate change was slowly destroying dinosaur populations in the million-year time period prior to the great asteroid.

New geological evidence, analyzed by scientists from Imperial College London, University College London and University of Bristol, finds that dinosaur populations were actually thriving before the asteroid hit. The reason why climate change is believed to have contributed to the dinosaur’s demise is merely based on the concentration of fossils found in regions across the world. Some scientists believe that the number and diversity of dinosaur species fell before the big asteroid hit, but those mathematical projections did not consider the natural conditions that are necessary to preserve fossils from one region of the world to the next. In fact, previous analyses of dinosaur populations underestimate the number of species at the end of the Cretaceous.

The new study focuses on the conditions that were necessary in order for fossilization to occur. Using “ecological niche modeling” the researchers simulated environmental conditions that each species of dinosaur required in order to survive. These climate conditions were mapped across the continent and simulated over time. The researchers were then able to get a clear picture of where specific species of dinosaurs could survive, even as climate conditions changed. Previous modeling only considered where their fossils were found.

In the end, the researchers found multiple habitats that could support dinosaur populations by the end of the Crustaceous Period. Most importantly, they realized that these habitats were not conducive to supporting fossilization when dinosaurs perished. Even though there are fewer fossils found in these areas today, these areas had ideal climate conditions for the dinosaurs to thrive. In addition, the researchers found that these ideal habitats were smaller in size, reducing the likelihood that paleontologists would find a fossil from one of these areas. The study, published in Nature Communications, shows that dinosaurs flourished during volatile climate conditions over a million year period. They were intelligent creatures that could adapt to climate changes.

“The results of our study suggest that dinosaurs as a whole were adaptable animals, capable of coping with the environmental changes and climatic fluctuations that happened during the last few million years of the Late Cretaceous,” says lead researcher Alessandro Chiarenza, a Ph.D. student in the Department of Earth Science and Engineering at Imperial. “Climate change over prolonged time scales did not cause a long-term decline of dinosaurs through the last stages of this period.”

If dinosaurs could adapt to large scale climate changes that occurred during the Cretaceous period 66 million years ago, who’s to say that humans can’t adapt to the weather today? The Democratic Party and the United Nations believe that climate change will wipe out humanity in twelve years, hyperventilating about carbon levels, scary weather events, warm days, and a burning planet. If the dinosaurs could adapt to changes in Earth’s climate, then why do we fear natural life cycles and think we should try to control it all?