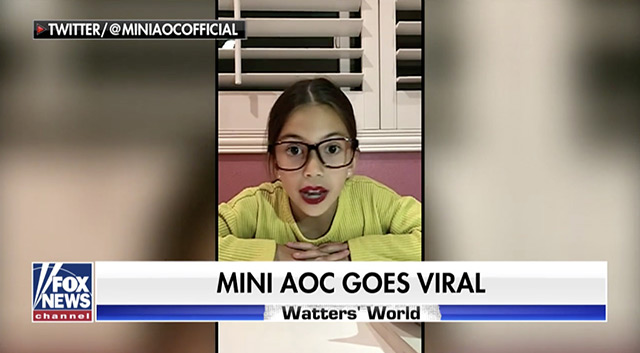 Will Alexandria Ocasio-Cortez apologize to 8-year old Ava Martinez, best known as “Mini AOC” in a series of viral videos poking fun at the perceived ignorance of the New York socialist congresswoman?

While Ocasio-Cortez agitates against our border agents — who are committed to stopping the human trafficking of children — the leftist’s unhinged supporters drove the precocious child comedienne Martinez into hiding with death threats.

Newsweek reports: “Earlier this week, the account had tweeted out several photos of “Mini AOC,” an 8-year-old girl named Ava Martinez widely known for her impersonations of Ocasio-Cortez, standing outside a fenced-off park in an all-white outfit and red lipstick, looking visibly upset.

“The Left’s Harassment and death threats have gone too far for our family. We have been getting calls on our personal phone numbers,” Ava’s stepfather Salvatore Schachter tweeted. “For our safety and for our child’s safety, we deleted all Mini AOC accounts.’”

Alexandria Ocasio-Cortez’s friend who directed her famous “dancing” video from college stands to profit directly from the socialist congresswoman’s proposed “Green New Deal” through his work as a green transportation executive, raising concerns about the fact that Ocasio-Cortez and her friend have both given each other recent professional recommendations. A construction executive who spent years working as Ocasio-Cortez’s father’s office manager also stands to profit from the New York Democrat’s plan, which would result in the re-construction of many buildings around the United States. Sources tell Big League Politics that Ocasio-Cortez’s LinkedIn page is ripe with connections who would benefit from the Green New Deal, as deep research continues into Ocasio-Cortez’s personal and professional relationships with individuals in the green industry and the environmentalist movement.

Ocasio-Cortez’s good friend Julian Jensen filmed her dancing video, in which the young socialist gallivanted on a rooftop.

“We thought it was fun and a great way to showcase your community,” Boston University classmate Eric Baker, who shot the film with Jensen, told BU Today. “If we could jump on the ball, we thought we could do a Boston University mashup. We were student ambassadors at the Howard Thurman Center with Alexandria and others. We decided to make our own version. Julian and I did this from top to bottom, shooting, editing, casting.” Baker confirmed that Cortez was a friend and “sort of the face of the Thurman Center.”

Ocasio-Cortez and Jensen remained close, as evidenced by the fact that Ocasio-Cortez provided Jensen a professional recommendation as Jensen pursued a career in product design.

“He is at once reflective and engaging, all while bringing a design-thinking approach to working with people and teams,” Ocasio-Cortez stated on the About page of Julianjensen.com. Ocasio-Cortez, who was Jensen’s top listed recommender, is identified on Jensen’s website as a current New York congresswoman.

Jensen also provided Ocasio-Cortez a recommendation on LinkedIn, writing, “Gifted instinct, leadership, and intelligence are the words that come to mind when I think about Alexandria. I’ve had the pleasure of knowing her for many years, during which we worked together as ambassadors at Boston University and I witnessed her make many different and valuable contributions to the BU community…”

It just so happens that Julian Jensen is now a top executive at a green transportation firm that uses very similar talking points to those employed by Ocasio-Cortez, author of the “Green New Deal.” Both the Green New Deal and Jensen’s company seek to increase ride sharing and national use of public transportation.

The company Goin issued a press release from San Francisco on October 9, 2018, just months prior to Ocasio-Cortez rolling out her proposed legislative resolution. Jensen landed the job just four months after Ocasio-Cortez won her New York congressional primary and instantly became the darling of the Democrat Party.