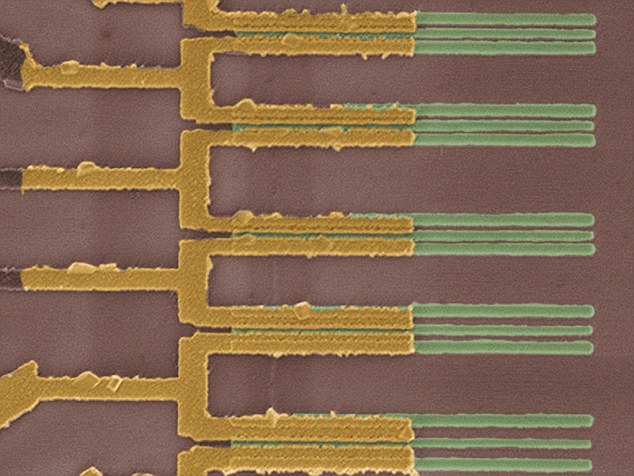 Researchers found a way to turn a light-emitting diode into a cooling system. By reversing the electrodes of the LED, its light chilled nearby electronics. The new approach holds great promise for solid-state cooling tech.

Laser cooling was the first photon-based method of cooling an object. In their new project, the University of Michigan researchers used the chemical potential of thermal radiation.

“Even today, many assume that the chemical potential of radiation is zero,” explained U-M researcher Edgar Meyhofer. “But theoretical work going back to the 1980s suggests that under some conditions, this is not the case.”

When a battery is placed in a device, its chemical potential triggers an electric current. The metal ions in the battery flow to the opposite side to shed chemical potential energy. The “discarded” energy gets used as electricity.

For the most part, visible light, infrared thermal radiation, and other forms of electromagnetic radiation do not possess chemical potential. (Related: Researchers develop a new type of nano computer chip that uses transistors made from AIR.)

“Usually for thermal radiation, the intensity only depends on temperature, but we actually have an additional knob to control this radiation, which makes the cooling we investigate possible,” explained researcher Linxiao Zhu, the lead author of the paper.

It is possible to reverse the positive and negative electrical connections of an LED. Reversing the electrodes prevents it from emitting any light. The reversal also stops the release of thermal radiation.

An LED and the object it needs to cool down must be in very close proximity. The gap cannot be greater than a single wavelength of infrared light. The near field effects make it easier for infrared light to flow from the hot object to the LED, where the photons get cooled down thanks to the effects of the reversed electrodes.

Previously, the research team performed heating and cooling experiments with tiny devices. They placed the devices very close together. At those distances, infrared photons succeeded in escaping a device and flowed over to an LED with reversed electrodes.

Using infrared light to cool microprocessors and other electronic devices

For their new experiment, the researchers built a small calorimeter that measured shifts in energy. They placed the sensor next to a similarly small LED. The two devices constantly gave off thermal photons. They also absorbed infrared light from their partners and other sources around them.

An object at room temperature gives off light. Sensors capture that light. Reversing the electrodes of the LED made it behave like a cool object. It absorbed photons from the calorimeter. The gap between the devices disrupted the conduction process that made it possible for heat to escape the LED. The resulting effect cooled the calorimeter.

The new photon-based cooling technique may be what future computing technology needs. Every new generation of computers and mobile devices crams more computing power into smaller microprocessors. But there is only so much processing power that can fit inside a given space before the microprocessor exceeds its cooling capabilities.

LEDs with reversed electrodes may be able to keep microprocessors cool by quickly drawing off larger amounts of heat. Smartphones stand to benefit from the compact light-based cooling approach since they have so little space to spare.