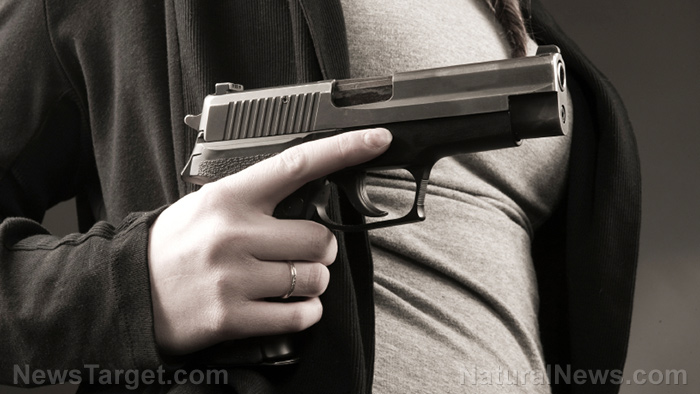 Part of my promise to reader is to not only share wisdom about nutritional healing and disease prevention, but also help you stay healthy and alive during collapse scenarios that may place you at risk of personal injury or assault. The No. 1 best tool for self-defense that can aid adults of any age is the pistol. A pistol is the “great equalizer” that can allow a 120 lb. frail elderly woman to stop a 250 lb. monstrous predator who intends to cause her harm. This is probably why the fastest growing group of gun owners in America is women.

As the political landscape becomes increasingly volatile — and America seems headed for internal strife initiated by armed left-wing Antifa terrorists — more and more people are seeking out practical solutions for self-defense. Today, I bring you two instructional videos plus a podcast that can help you avoid costly mistakes while accelerating your personal preparedness using the right gear and techniques.

As always, keep it legal and follow all local laws about pistols, knives and ammunition. Everything you see in these videos is legally owned and responsibly handled. Get professional training before you attempt these skills yourself. The purpose of all these skills is purely self-defense.

What happens when your pistol gets covered in mud?

If you are thrown to the ground in some sort of fight, your pistol and ammo magazines may get covered in mud. Will they still function?

During a recent (rather brutal) training day that was largely spent rolling in the mud and firing pistols from various positions on the ground, I found that a relatively new Sig Sauer P320 pistol experienced an alarming number of double feeds and failures to extract. As you’ll see in my video, I attributed this to the fact that the pistol was not “broken in” to much of an extent, allowing the mud to really gum up the works, so to speak. But since I have not done a side-by-side test with a new Glock, I don’t yet have enough data to determine whether a Glock would have fared any better in this particular circumstance.

What I learned is that mud sucks and can really cause a pistol to stop functioning. Hence the need for all those tap-and-rack jam clearing skills.

How do you transition a knife from offensive to defensive positions with one hand?

I received a lot of positive feedback on Health Ranger’s battle belt tour video, and many readers asked for more details instruction on knife handling and offensive vs. defensive grip positions.

So I put together the following video which shows step-by-step instructions for gripping, opening and manipulating knives for self-defense purposes.

Keep in mind that knives are obviously sharp, and you should always start out practicing with a rubber training knife so that you don’t cut yourself.

What’s the smart way to efficiently train yourself in self-defense skills?

I’ve also posted a podcast that you’ll find valuable in planning for your own self-defense training. As I explain in the podcast, self-defense requires a well-rounded collection of basic skills:

As I explain in the podcast below, if your goal is practical self-defense, you should strive to obtain basic proficiency in all five areas and not worry about becoming an expert in any one area.

If pursued properly, you will be able to handle yourself against 99% of all typical threats, but you won’t be the No. 1 competitor in any particular sport or skill set, since that isn’t your goal in the first place.

In just 500 hours of total instruction time, you will be more proficient than 99% of the population at large when considering the breadth of your skill set. You won’t be the best shooter, the best fighter, the best grappler, etc., but you will possess skills that can overtake even the top experts in any particular field because you are combining skills across different areas of expertise and solving problems with a synthesis of responses.

For example, if some Brazilian Jiu-Jitsu expert who happens to be a drunk predator bully takes you to the ground and tries to pound on you, your basic grappling skills should allow you to maintain enough control to stay on your back (where your opponent is in between your legs, which is called the “guard” position). From that position, you might decide draw and fire your pistol at very close range into your opponent, ending the fight and overcoming the skill difference in BJJ skills. This works because the best BJJ master in the world cannot dodge bullets. In fact, most high-level BJJ fighters have never dealt with firearms. By bringing a pistol to a grappling fight, you just turned the tables and saved your own life.

Similarly, striking training — I recommend Krav Maga, the Israeli fighting art — will help you block or avoid strikes coming at you from an attacking aggressor, allowing you the split second you need to draw and deploy your knife, for example, or your concealed pistol. The fact that you’ve had a few hundred hours of Krav Maga means you’ve covered basic “360 defense” and ways to avoid being punched in the face or kicked in the groin. People who have had zero training in striking defense have no clue whatsoever about avoiding being hit, and they will be easily knocked out with a single punch or kick.

Finally, keep in mind that over 95% of concealed carry holders in America pursue no additional training beyond the concealed carry testing requirements (which are so basic that people have actually passed the shooting skills blindfolded). Thus, even receiving just 25 hours of pistol skills training puts you in the top 5% of pistol skills among the general public. If you get to 50 hours of pistol training, you might be in the top 2% among the general public. If you question these numbers, consider the fact that receiving FAA permission to pilot a small, single engine airplane only requires 40 hours of flight instruction. You can learn a lot in 25 – 50 hours of actual hands-on training time.

Seek out local instructors for all these skills. By going to classes for 2-3 evenings a week, you can achieve proficiency in all these skills over time. You will also be more fit for doing so, since much of this training will involve physical exertion at some level.

Stay informed. Follow all my podcasts at the HR Report channel on Brighteon.com.

Also read Gear.news or Survival.news for daily wisdom on keeping yourself alive when SHTF.