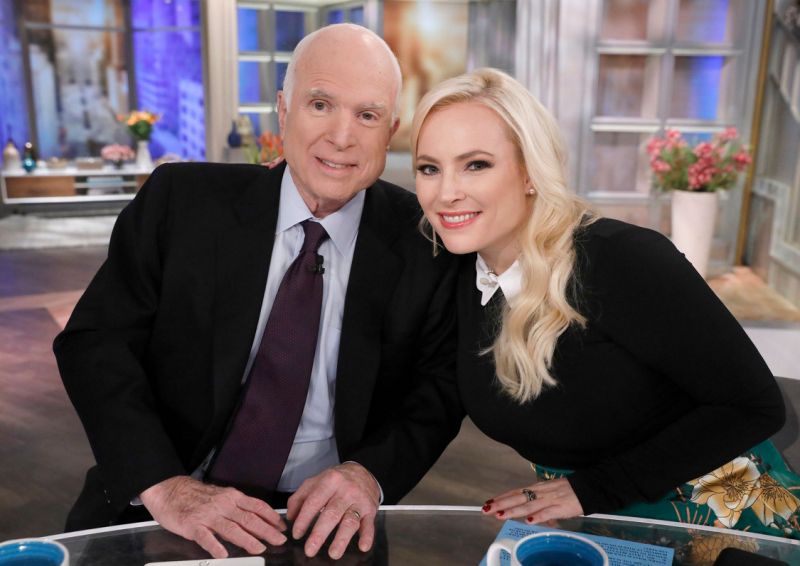 We understand that a child would want to protect his or her parents from attacks, would want to defend their honor, would want to ensure that their legacy remained intact, but the way in which Megan McCain, daughter of the late Sen. John McCain, R-Ariz., is going about it may well have crossed a line.

That’s because she clearly used assassination rhetoric against POTUS Donald Trump, whom she wrongly accused in recent days of insulting her father’s legacy — again.

Earlier this week, the disgustingly dishonest “mainstream” media blurted out an accusation that the president demanded the name of the USS John S. McCain, an Arleigh Burke-class destroyer currently in service with the U.S. Navy, be covered up during his visit to Japan to see Prime Minister Shinzo Abe (the McCain is home-ported there).

In a May 15 email to U.S. Navy and Air Force officials, a U.S. Indo-Pacific Command official outlined plans for the president’s arrival that he said had resulted from conversations between the White House Military Office and the Seventh Fleet of the U.S. Navy. In addition to instructions for the proper landing areas for helicopters and preparation for the USS Wasp—where the president was scheduled to speak—the official issued a third directive: “USS John McCain needs to be out of sight.”

In the same article, the WSJ noted two things: After a Navy commander “expressed surprise” about that directive, “the U.S. Indo-Pacific Command official replied: ‘First I heard of it as well’” — a denial that the official was aware of the directive. Also, Acting Defense Secretary Patrick Shanahan supposedly “approved measures to ensure” the warship — which bears the name of Sen. McCain’s father and grandfather — “didn’t interfere” with POTUS’ visit, but he later said he first heard of the incident in news reports. (Related: HOT SEAT: John McCain lackey who handled bogus Trump dossier SUBPOENAED by House Intel Committee.)

So, somebody’s lying to the media again, but of course, once the WSJ published the story everyone else ran with it (the president would later deny knowing anything about it as well).

I was not informed about anything having to do with the Navy Ship USS John S. McCain during my recent visit to Japan. Nevertheless, @FLOTUS and I loved being with our great Military Men and Women – what a spectacular job they do!

This is hideous language — where is the outrage?

Nevertheless, Megan McCain, who has been feuding with POTUS since her father died, picked up on the story and slammed POTUS once again (one of Sen. McCain’s last wishes was that Trump not be invited to his funeral — because he was still angry over POTUS’ slam during the 2016 election cycle about McCain becoming a POW during the Vietnam War).

Then, her rhetoric escalated during Friday’s ABC program The View, where she is a co-host. The subject was impeachment of POTUS, of course, and she said (encouraging Democrats to move ahead with it, mind you — she is about as much of a Republican as her father was, which is to say, not much):

…I will say, if you take this kill shot, Democrats, ya better not miss. (Co-host Joy Behar: “Yeah”) Ya better hit his jugular and if there’s even a finger still moving at the end of it you’re gonna ruin your chances in 2020. But you better do this well, if you’re gonna do it. And my faith in Democrats…

Remember when the disgusting mainstream media tried to blame Sarah Palin for the Left-wing lunatic who shot and nearly killed former U.S. Rep. Gabby Giffords (D-Ariz.) in 2011? They accused her of ‘inciting’ the shooting because a political organization she was associated with put “crosshairs” on all Democrat districts that were vulnerable in the upcoming (2012) election.

But Megan McCain’s assassination rhetoric directed at POTUS Trump? Nothing to see here.

Let’s face it. John McCain may have been a hero of the Vietnam War, but he was culpable in at least two major scandals as a senator: The “Keating Five” savings and loan corruption scandal, which cost scores of Americans their life savings (he was never charged much less convicted) and his role in ensuring that James Comey’s FBI had a copy of the very bogus Steele Dossier, the most important document in the coup attempt against POTUS Trump (treason).

Read more about the deep state corruption and coup attempt against POTUS Trump at DeepState.news and Trump.news.