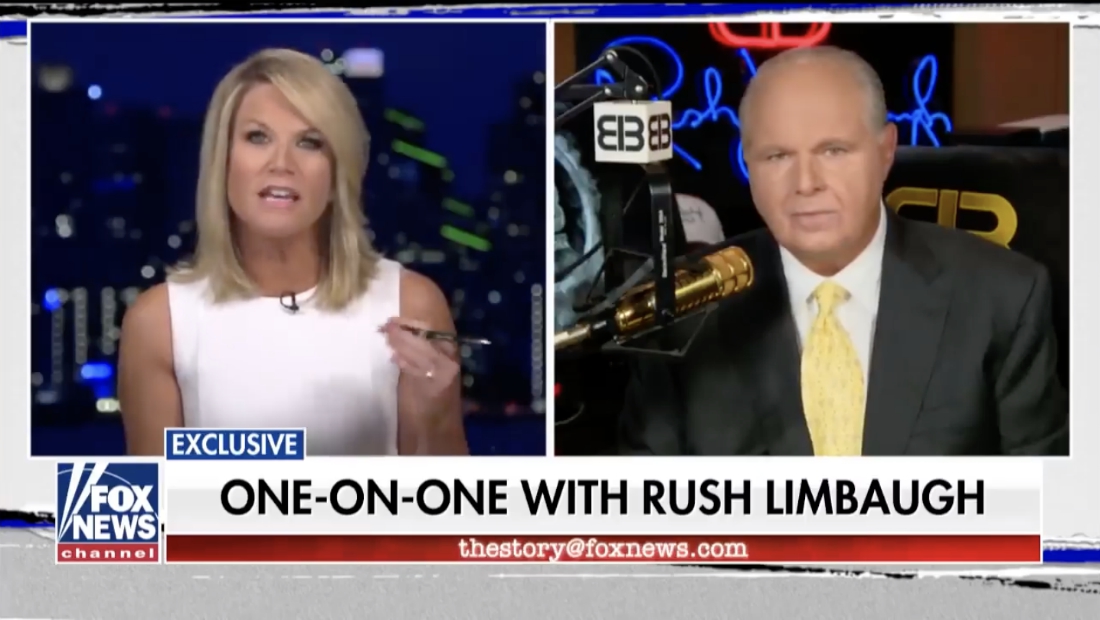 Never one to mince words, talk radio legend Rush Limbaugh said point-blank Wednesday evening during an appearance on Fox News’ “The Story” with Martha McCallum that Hillary Clinton not only should have been indicted by the FBI and special counsel Robert Mueller but that she should be wearing prison stripes by now.

Limbaugh’s comments come on the heels of unbelievably arrogant statements made by Clinton during an appearance at Time magazine’s annual snooze fest ‘gala’ celebrating the washed-up magazine’s “Top 100” ‘most influential’ people of 2018.

“I think there is enough there that any other person who had engaged in those acts certainly would have been indicted,” Clinton said regarding Mueller’s ‘finding’ during his sham investigation that POTUS Donald Trump never “colluded” with Russia to ‘steal’ the 2016 election — or that the president “obstructed justice” in firing the man who cleared Hillary, James Comey.

“I’m really of the mind that the Mueller report is part of the beginning…because there’s still so much more that we should know and that we should act upon,” Clinton — who seems to think she is still in government pulling strings — continued (what’s this “we” business?). “And we’re a long way from knowing because we need to get the full report — the unredacted version.”

Hillary Clinton: "I'm really of the mind that the Mueller report is part of the beginning…because there's still so much more that we should know and that we should act upon."

"And we're a long way from knowing because we need to get the full report — the unredacted version." pic.twitter.com/ajlw0pYeFd

What chutzpa. But then again, this is arrogance born out of the fact that as a Deep State elitist, she knew from the outset that Comey was never going to recommend she be indicted for her criminal mishandling of classified emails via her home-brew server…that Obama knew about. (Related: What did Obama know about Trump collusion hoax and when did he know it? Everything, and from the beginning.)

She knew that as a member of the DC Swamp in good standing, she was never going to be held to the same accountability she claims POTUS Trump must now be held to.

Will Clinton EVER be brought to justice? Maybe…

It was all too much for Limbaugh, who recounted the various ways in which Hillary Clinton should not now, at this time, be breathing free air.

Clinton, Limbaugh noted, is the one who really “tried to rig a presidential election” by working through the Obama regime to co-opt the most corruptible members of the FBI, the Justice Department, and U.S. intelligence.

It was Clinton’s campaign, he noted, that paid for the bogus “Russia dossier” — which used Russian sources quoted by former British spy Christopher Steele and was eventually used to justify spying on a member of the 2016 Trump campaign, Carter Page.

The conservative talker went on to point out that Clinton has been twice rejected by the American people — once when she lost the Democratic nomination to Barack Obama in 2008 and again when POTUS Trump beat her.

“She is the last person who ought to be listened to about what ought to happen to Donald Trump!” he asserted.

Truth bombs, one and all.

Will Hillary ever get hers? Time will tell, but there are continuing investigations into the roles played by Deep State actors — Hillary included — to steal the election from Trump.