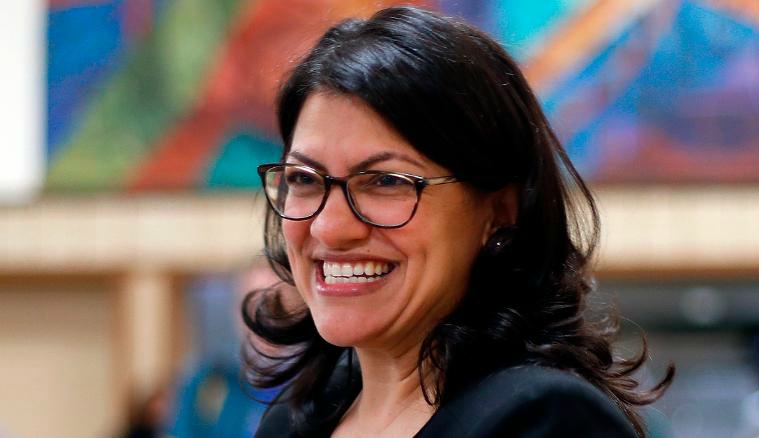 The incoming class of freshmen Democrats is unique for a number of reasons, not the least of which is that more than a few of them appear to be among the most mentally unstable people in the country.

Take Rep. Rashida Tlaib of Minnesota, for example. She was sworn in on Thursday as the first “Palestinian-American” member of Congress in our nation’s history, and the fact that she’s a woman, of course, only excited her Left-wing base even more.

Her first 24 hours in office were momentous for a couple of reasons.

First, she was videoed Thursday evening at an event sponsored by uber-progressive activist group MoveOn.org using an expletive to describe the president of the United States. As The National Sentinel reported:

According to multiple reporters, Tlaib shouted a threat to a crowd at a reception held by the progressive group MoveOn near Capitol Hill on Thursday night.

Axios’s Alexi McCammond reports that Tlaib quoted her son telling her, “Look, mama, you won. Bullies don’t win.” To which Tlaib reportedly replied, “You’re right, they don’t. And we’re gonna go in and impeach the motherf**ker.”

“We’re Going to Go in and Impeach the MOTHER F—–!”

If Trump had done this the media would have come unglued. #maga #kag pic.twitter.com/H7px0azYAx

If POTUS Donald Trump had called a member of Congress that name — especially a darling of the Left who is a Palestinian woman — the media and Democrats would have lost their minds (again).

Speaking of POTUS, when he rightfully described MS-13 gang members as “animals” because of the brutal manner in which they murder their victims (beheadings, multiple stabbings, beating people to death), then-House Minority Leader Nancy Pelosi, D-Calif., proclaimed that “was not a good thing.” Worse, she could not find it in her moral little heart to condemn her Democratic colleague for her unwarranted vulgarity, claiming she’s “not in the censorship business.”

Okay, but how about being in the ‘maintaining decorum’ business, Madam Speaker? Would you have so cavalierly dismissed this comment if it had been made by a Republican lawmaker in reference to Barack Obama?

Never mind. We know the answer to that. Back when U.S. Rep. Joe Wilson, R-S.C., shouted, “You lie!” to Obama during a speech to Congress about his health care proposal, Democrats — including Pelosi — came unglued and demanded that a) he apologize (he did); and b) that the GOP minority leaders ‘get control’ of their members (they did). None of that has happened regarding Tlaib’s comment, and she herself has been defiant over calls that she apologize. On Twitter, she wrote, “I will always speak truth to power.” Disgusting.

But at least Sen. Joe Manchin, D-W.Va., spoke up and condemned her.

I will always speak truth to power. #unapologeticallyMe

That wasn’t Tlaib’s only ‘moment’ in the spotlight this week. Shortly after she got into her new office, reporters spotted a change she had made to a world map, specifically in the Middle East: She attached a handwritten note with the word “Palestine” and an arrow pointing to Israel.

Someone has already made a slight alteration to the map that hangs in Rashida Tlaib’s new congressional office. pic.twitter.com/mwyshIog4r

Mind you, Israel is one of the United States’ most important allies in the Middle East, which is why the president followed through on his campaign pledge to move the American embassy to Jerusalem.

The Palestinian Authority, by comparison, harbors terrorist organizations like Hamas, which is sponsored, funded, and supplied by Iran and which is responsible for keeping the Jewish state ‘under the gun’ — literally — 24/7. As someone of Palestinian heritage, Tlaib should be grateful for the reality that were it not for Israel, there would be no autonomous Palestinian Authority self-rule in Gaza and the West Bank.

Tlaib is just getting her feet wet as a new member of Congress. But she’s bringing a special ‘crazy’ with her that will be counterproductive and divisive — not good in an era where divisiveness is already at its peak.

Read more about what happens when Americans vote for Democrats at VoteDemocrat.news.