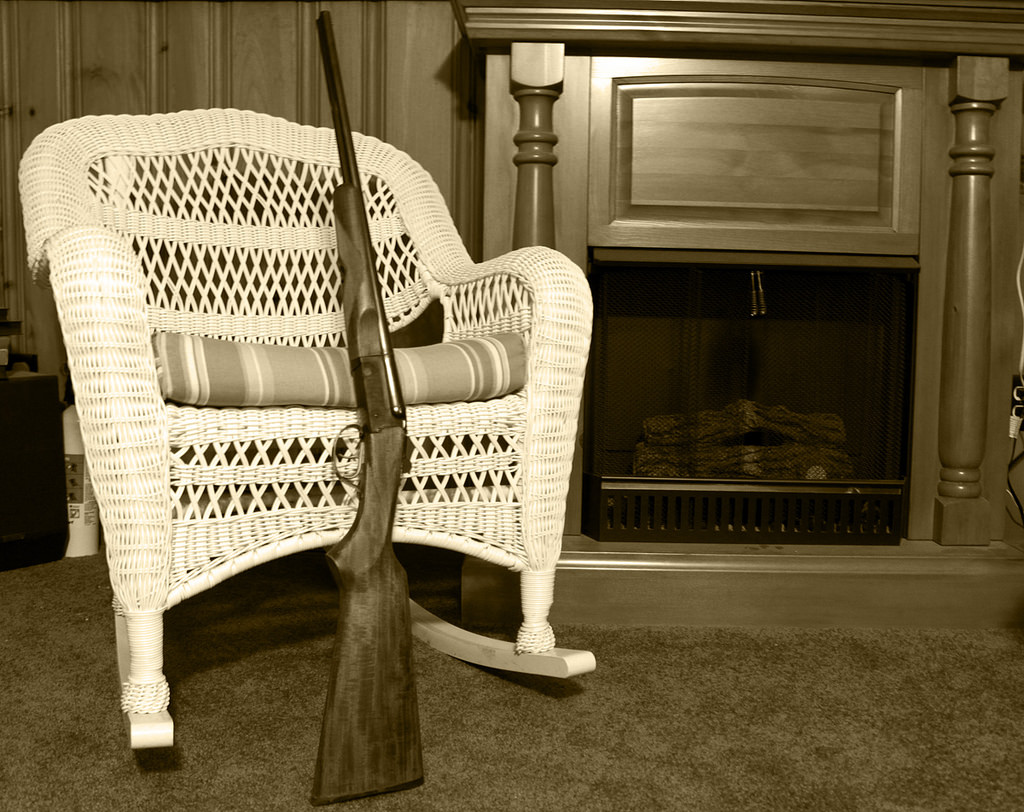 When he’s not busy threatening to stalk and harass First Lady Melania Trump at her son Barron’s school, washed up Hollywood actor and anti-Second Amendment nutcase Tom Arnold apparently spends his time making up fake statistics about guns and spreading them across Twitter.

In a tweet reply he made on November 30 to another Twitter user who shared a photo of NRA spokeswoman Dana Loesch sitting on a couch holding an antique rifle, the former husband of Roseanne Barr childishly snarked:

“It’s the fart @Dloesch is squeezing in that scares me the most about this picture. Must still be drinking her infomercial beet juice. Supergirl’s gonna hurt herself with the photographers big ole fake gun too. Can’t believe anyone still falls for this @NRA fraud.”

When Arnold was challenged by still other Twitter users for these statements, including one user who mocked Arnold by saying that “he shouldn’t bring a knife to a gunfight,” Arnold went off the deep end by responding with this little ditty:

“This explains why 80% of gun owners shoot themselves or members of their own families.”

The Twittersphere was quick to point out that Arnold had seemingly pulled this 80 percent figure out of … who knows where. It was also a very lame and embarrassing attempt by Arnold to position himself as Leftist social media’s gun control virtue-signaler of the day, illustrating once again the brain-addled arrogance of Hollywood armchair liberals who simply don’t have a clue about the facts.

“The Remington 870 in my closet shot me twice this week,” jeered one Twitter user in response to Arnold’s ignorance. “I’m only stronger now!”

“This is on Ocasio-Cortez level,” joked another, referring to the many ridiculous and often completely untrue statements that Representative-elect Democrat Alexandria Ocasio-Cortez makes on an almost daily basis.

For more gun-related news, be sure to check out Guns.news and SecondAmendment.news.

It’s important to point out that Arnold is really only famous because of his past relationship with Barr, as well as a single major role he played as Arnold Schwarzenegger’s partner-in-crime in the movie True Lies. Other than that, he’s pretty much a blowhard who happens to have a decent amount of Twitter followers, which means his name is going to come up every now and again in the news cycle whenever he decides to say something stupid.

In this case, even Arnold’s anti-gun followers didn’t seem too thrilled with this latest demonstration of stupidity, seeing as how more users responded to rebut his false figures than “loved” or retweeted his tweet. In other words, Tom Arnold now epitomizes the definition of cringe, and almost everyone finally sees it.

While firearms accidents do, indeed, occur, they’re very few and far between – their numbers being nowhere close to the 80 percent figure among legal gun owners that Tom Arnold decided to blurt out on Twitter without any evidence whatsoever to back it.

“Americans own somewhere in the neighborhood of 400 million guns,” points out Tom Knighton from BearingArms.com, one of Arnold’s critics who published his own article on the matter to set the record straight.

“If 80 percent of us were shooting ourselves or family members, I’m pretty sure there would be news reports on this. The anti-gun media would latch onto this and pound it like a nail that doesn’t want to be driven down. They’d never give up on this position, and why would they? In reality, it would probably be effective.”

Be sure to check out the NRA channel at Brighteon.com for more NRA news.