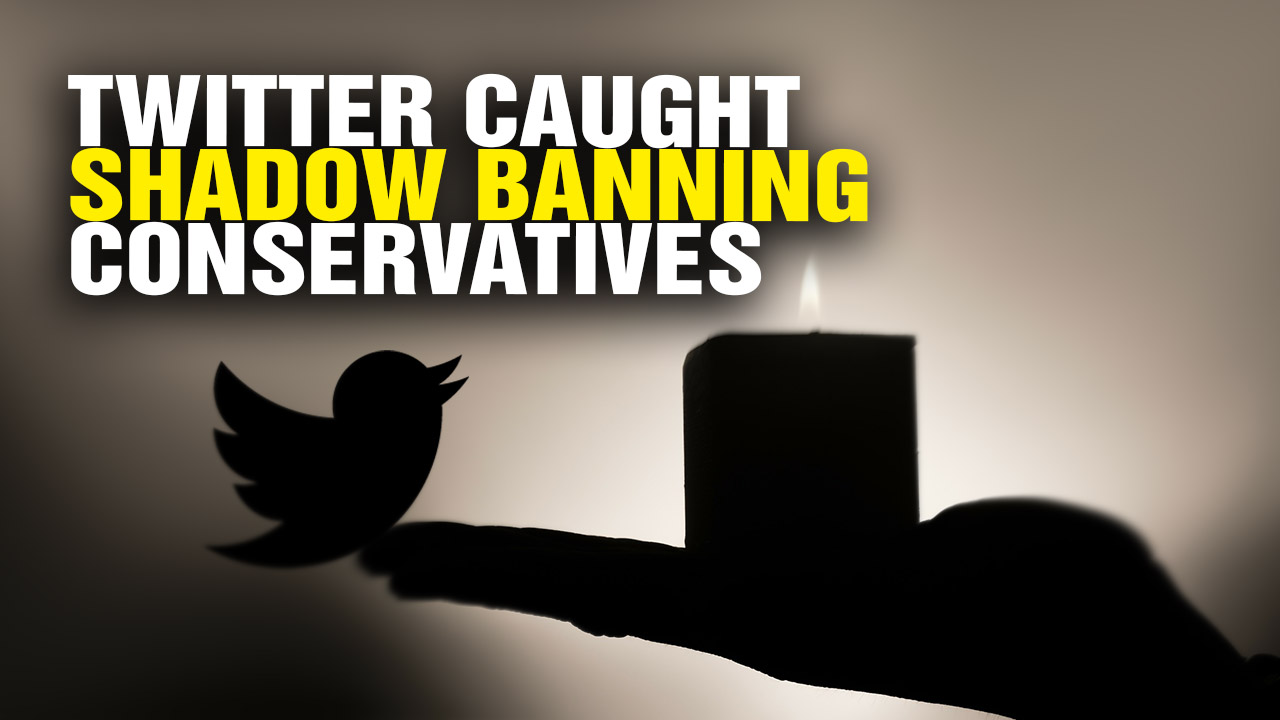 In recent weeks we’ve reported regularly on the censorship and shadow banning by the social media giants of nearly all conservative and pro-Trump media, as it has become increasingly obvious that YouTube, Twitter, Facebook, and Google are indeed engaged in an effort to silence anyone who doesn’t parrot far-Left groupthink.

As often as they’ve been accused of political bias, the social media giants have denied that they practice it. But a bizarre non-denial denial on Friday by Twitter essentially proves the allegations are correct.

It all started with a recent analysis by Left-leaning news site Vice, which reported that Twitter was most definitely shadow-banning conservative, pro-Trump media and Republican lawmakers but was not meting out similar treatment of liberal media and Democrats.

People are asking us if we shadowban. We do not. But let’s start with, “what is shadow banning?”

The best definition we found is this: deliberately making someone’s content undiscoverable to everyone except the person who posted it, unbeknownst to the original poster.

We do not shadow ban. You are always able to see the tweets from accounts you follow (although you may have to do more work to find them, like go directly to their profile). And we certainly don’t shadow ban based on political viewpoints or ideology. [emphasis added]

In other words, even followers of users won’t get the user’s tweets in their feed; they have to go to the user’s profile in order see their tweets – an extra step that obviously is being employed arbitrarily. But it also defeats the purpose of actually following someone, as noted by Christina Laila of The Gateway Pundit.

Twitter denies they shadowban accounts then ADMITS tweets from people you follow may not come down your feed ‘you may have to go directly to their profile’.

SO WHAT THE HELL IS THE POINT OF THE FOLLOW BUTTON IF THEIR TWEETS DON’T COME DOWN OUR FEEDS??? pic.twitter.com/50WxPAVGD4

But of course, the denial/non-denial from Gadde and Beykpour is a lie anyway based on the admission of some of Twitter’s own employees. In an undercover journalistic sting released in January, James O’Keefe’s Project Veritas captured Twitter engineers on video admitting that they do indeed shadow ban “sh*tty people” – users who they themselves decide are ‘not worthy’ of a voice and representation (conservatives and Trump supporters).

“Although Twitter presents itself as politically neutral, it’s culture behind closed doors is one of blatant censorship and systematic bias. Watch closely, @jack, because you know we are,” wrote O’Keefe with a link to his organization’s undercover video where the engineers admit to their banning (@jack is a reference to Twitter founder and CEO Jack Dorsey).

Although Twitter presents itself as politically neutral, it’s culture behind closed doors is one of blatant censorship and systematic bias. Watch closely @jack, because you know we are. FULL VIDEO: https://t.co/Tqrd4FBr2v pic.twitter.com/DBOIcEvX8W

As reported by Zero Hedge, the first clip shows one former Twitter software engineer who is explaining why and how the platform “shadow bans” certain users. (Related: FINALLY: POTUS Trump, GOP, demand probe into ‘shadow banning’ of conservatives on Social Media.)

Abhinav Vadrevunoted, “One strategy is to shadow ban, so you have ultimate control. The idea of a shadow ban is that you ban someone, but they don’t know they’ve been banned, because they keep posting but no one sees their content. So, they just think that no one is engaging with their content when in reality, no one is seeing it. I don’t know if Twitter does this anymore.”

He was followed by Olinda Hassan, the policy manager for Twitter’s Trust and Safety team said on Dec. 15, 2017, at a Twitter holiday party, who said that the platform was developing a system of “downranking” “sh**ty people.”

The censorship has drawn the attention of some members of Congress. Rep. Matt Gaetz, R-Fla., thinks the shadow banning is a campaign finance violation, so he’s lodged a complaint with the Federal Election Commission.

“The evidence is piling up that I am being treated differently on Twitter than people on the political Left and I don’t like that because I enjoy the Twitter platform, I enjoy the engagement, I enjoy the candor,” he said. “So, I believe that Twitter may have illegally donated to the campaigns of my opponents by prejudicing against my content.”

The censoring social media giants are running out of excuses. And time.